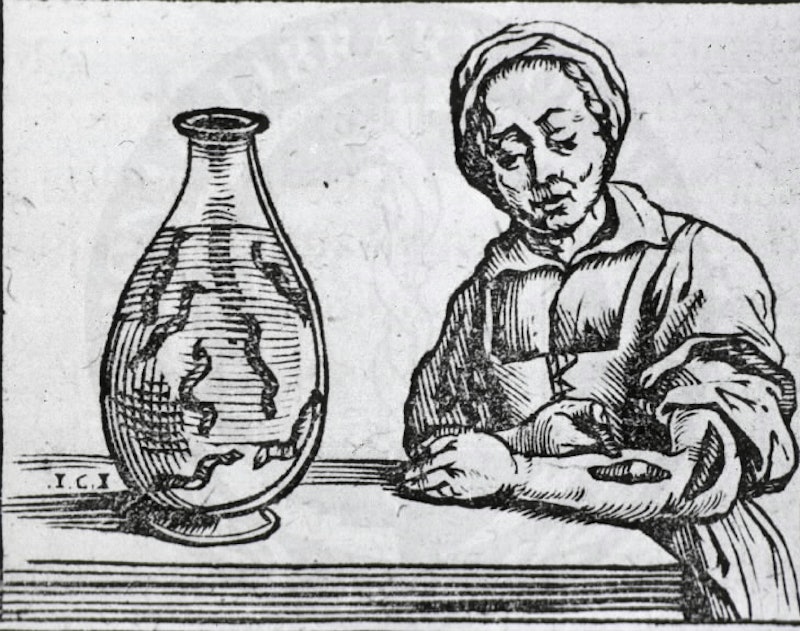 If you're a woman looking for work in medieval Europe, 19th-century London, Edo period Japan or ancient Mesopotamia, have I got some options for you! Women have held many gender-segregated occupations throughout world history, from the more obvious ("queen," "governess," "priestess") to the slightly more unexpected (women once performed most computer programming jobs); but as the tide of industry has moved on, some occupations that were once the specific domain of female workers at previous points in human civilization have dropped away. Which is pretty good news — unless, of course, you were eager to take a job being bitten by leeches, poisoned by phosphorus or blamed for a noblewoman's farts. Because, at various points in the past, each of these jobs was considered "women's work."

Considering the modern arguments about equal pay for women and gender discrimination in the workforce, it's worth remembering just how far some aspects of women's work have come — as well as how far they haven't. Hard, disgusting labor is still a large part of many women's lives worldwide, unfortunately. And it becomes even more crippling when women are still expected to be entirely responsible for housework, food-making and child-rearing when they return home — as they are in many situations. While we agitate against these unfair standards that keep women away from higher paychecks and better jobs, it's worth remembering that, historically, women were often exiled to jobs that were looked down upon or considered "lesser" than men's jobs — and that for many women, this is still true. History matters; it's what puts us into context, and allows us to take the same steps for other people.

So here are four disgusting, poisonous, or just humiliating jobs for women that have thankfully now largely disappeared from the world. Breathe a sigh of relief.

Before the industrialization of the matchmaking industry in the early 20th century, making those little fire-starting implements was a manual affair, involving dipping small sticks into a solution of phosphorus — by hand. And that meant that the "match girls" — the hordes of poor girls who sold and manufactured matches on the streets of London from the 1840s to the beginning of the First World War — were exposed to huge amounts of white phosphorus, which isn't exactly healthy. People who inhale much phosphorus have a nasty tendency to develop something called "phossy jaw," a progressive abscessing of the gums and jaw bone that could cause violent disfigurement, brain damage and death. (It also caused the jaw bone to glow in the dark, just for some extra horror value.)

200 young match girls actually held a successful strike in London in 1888 to bring the problem to public attention, attracting the journalist Annie Besant, who published an expose of the conditions of the match-making factories.

Most modern people who've read a bit of history will know what a wet nurse was: the fashion of noble families in parts of Europe for much of the medieval and Renaissance period was to bring in lower-status women to breastfeed the newborn children of noble ladies, because of the belief that the mothers themselves might suffer and weaken giving up milk just after the trauma of birth (wet nurses do still exist in a variety of capacities around the globe; however, in this section, we're solely discussing the wet nurses employed by European high society through the 17th century or so).

As I've discussed before, there was a lot of paranoia among noble families about getting the "right" wet nurse, and not just because she'd be responsible for their kid; they thought everything from intellect to class could be passed down via breast milk.

The serious bit comes when you consider that a woman giving milk must already have a kid of her own. In these eras, wet nurses were the subject of intense suspicion about whether they were treating their own child or their charge better, and they couldn't win; if they "neglected" their own they were monstrous, and if they "neglected" the noble kid they were mercenary and untrustworthy. They were also accused of accidentally smothering babies, causing disease, and all manner of other sins. Just because noble women couldn't be bothered to feed their own kids.

Ever felt as if you weren't being fully rewarded for your talents? You could always go stand in a stream and let leeches suck on your legs. Life doesn't get any fancier. Leeches, of course, played a strong role in medicine until the 20th century, as doctors used them for blood-letting prescribed to relieve the symptoms of a huge variety of ailments. But to do that, you need leeches — and if you haven't got your own private supply in a handy nearby marsh, you'd find yourself relying on leech collectors, who were usually women.

The life of the leech collector wasn't a particularly glamorous one. If you're squeamish, now's a good time to look at something else. Bait to catch leeches was a necessary part of the job, and people could either use live, older animals whose blood loss wouldn't hurt their value, or just stride out into the water themselves and pick the leeches off their bare calves. Obviously, this occupation wasn't exactly risk-free, as extensive blood loss could result and the leech bites could get infected and ulcerous.

In addition to all these other workplace hazards, the market for leeches was actually a complicated thing. During the 1800s, supplies of native European leeches became scarce, and leech smuggling and leech taxes decimated the local market and made prices skyrocket. And if you couldn't afford to buy a leech, you could rent one from a collector. Anybody who wanted to make money from them, though, had to be prepared to get bloody and wet.

This one isn't necessarily disgusting — but it's still relatively humiliating. During the Edo period in Japan, from 1603 to 1868, the nobler women among Japanese aristocracy employed a female servant known as a heoibikuni, whose chief duties were of chaperone or lady-in-waiting: fetching, carrying, accompanying their mistress on visits, arranging clothing and generally being the equivalent of a PA. But the heoibikuni had one specific duty designed to minimize their mistress's embarrassment: if the noblewoman farted during a social occasion and it was noticed, the heoibikuni would publicly take the blame.

Farting was, at the time, regarded as a serious social faux pas in higher Japanese society (and still is; Hokkaido recently issued a guide asking tourists not to fart or burp in public places to avoid offence). The heobikuni was basically a sacrificial fart-lamb for the sake of their mistress's dignity, particularly in ritual situations. Presumably everybody else knew she was taking the blame on purpose, though, so nobody would actually believe it. Which seems to defeat the purpose, but hey, what do I know.

More like this
Beyoncé & Madonna’s “Break My Soul” Remix Honors A Group Of Black Icons
By Stephanie Topacio Long
Why Experts Say Sleeping With A Fan On Isn’t Totally Risk-Free
By Sophie McEvoy
22 Movies On Netflix That Are Perfect For The Whole Family
By Bustle Editors
Your Daily Horoscope For August 15, 2022
By Mecca Woods
Get Even More From Bustle — Sign Up For The Newsletter