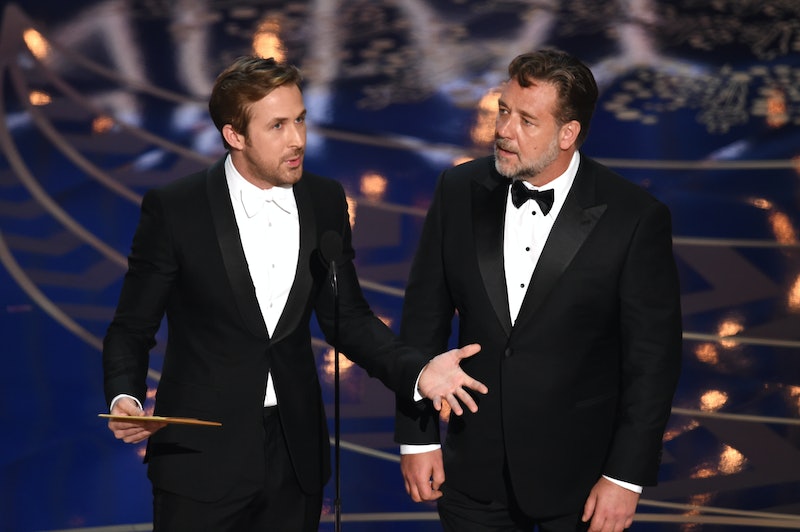 It's been a while since audiences have seen Ryan Gosling in a Hollywood blockbuster, but now, the meme-able star will take on Los Angeles in the coke-filled 1970s in The Nice Guys opposite Russell Crowe. In the film, their characters are anything but nice. Crowe's Jackson Healy makes a living delivering sinister messages (i.e. he breaks people's arms for cash), and Gosling's Holland March tricks old ladies into giving him money in exchange for solving crimes that have usually already been solved. He's also a raging alcoholic with a 13-year-old daughter. They are no where near role model citizens, yet there's something oddly charming about these "nice guys" nonetheless.

When asked if the men got into any real trouble together on or off set of the Shane Black directed film, Gosling assures, "I went out with Russell once and I learned my lesson." That sounds... vague. I ask him to elaborate, and he says: "He rented out a whole bar for the whole crew at the beginning of the film. He bought the bar and let everyone watch a game, his team — his Rugby team that he owns — the Rabbitohs."

It sounds pretty generous, but perhaps the kind act was also a not-so-subtle move to get his co-star to act the part more convincingly. "I know it seems like I'm playing drunk in the film," Gosling begins, "but I'm actually just still drunk the whole movie from that one night."

Hey man, whatever works! So what else happened on this epic night of debauchery? Any karaoke? "I don't remember. Maybe. I'm sure there's a tape somewhere."

...And with that I will make it my life's mission to find the alleged tape and share it with the world. Don't worry, America (and Canada and Australia), I won't sleep until we see these men croon their drunk hearts out.

The Nice Guys hits theaters May 20.