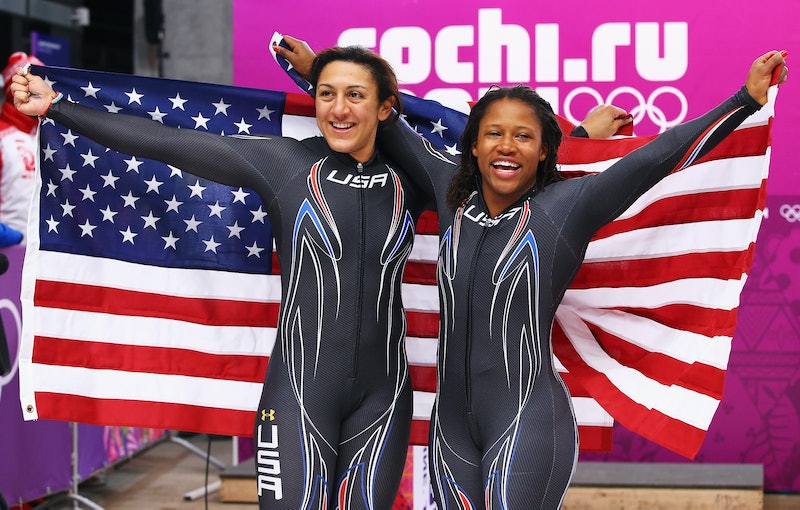 You think you're dedicated to your dreams? That may be, but Olympic bobsledder Elana Meyers takes it to another level. The 29-year-old Meyers, who won a silver medal in women's bobsledding Tuesday, started training for the Olympics when she was nine. Only catch was, she was actually training for a different sport. Throughout her childhood, and even at college at George Washington University, Meyers poured most of her energy into softball, hoping to make it to the Summer Olympic Games.

“This was the worst tryout anybody has ever had in the history of tryouts,” Meyers said. “I couldn’t get it together, and I don’t know if it was nerves or I just wasn’t ready for the Olympics yet.”

Meyers, who hails from Atlanta, Ga., was shattered. To make matters worse, the Summer Olympic Games dropped softball from the roster before the 2008 Games, leaving Meyers without a chance to try out again.

Not long after the sport was dropped, Meyers decided to leave the Mid Michigan Ice and retire from softball.

“It had nothing to do with the fact that it was dropped from the Olympics,” Meyers said. “I wouldn’t give up on something I love so much over something so trivial. It was just time to move on.”

Meyers went back to school to with a new goal: medical school. But she found she couldn’t let go of that Olympic dream. It was her parents who suggested giving the winter sport bobsled a try.

“I always thought I would make it to the Olympics for a summer sport, something warm, something more related to Atlanta, but I was willing to try out new things,” she said. “I wasn’t expecting much going into it.”

In 2007, Meyers took her first run on the ice, an experience she described as being shot down the mountain in a loud bullet. The transition from a summer sport to a winter one wasn’t that tough — once she got used to speeding down the ice at speeds up to 90 mph.

Women’s bobsled is a two-person sport and consists of a driver and a brakeman. The driver sits in the front of the sled and steers it down around the turns and curves of the mountain. The brakeman sits in the back and controls the speed of the sled so the team doesn’t crash. Meyers started out as a brakeman. She trained everyday, changing her diet and workout routine to bulk up strength and speed.

In 2010, Meyers finally achieved the goal she made for herself at age nine: She made the 2010 U.S. Bobsled Team. Erin Pac and Meyers would be one of three teams representing the U.S. in Vancouver.

But Pac and Meyers didn’t get to see much of the Games. Instead, they practiced and stayed focus with one thing on their mind — bringing home a medal.

“We were in our own little world,” Pac said. “We were determined. Bobsled was one of the last sports, so we spent most of the time just shut away from the village and other competitors. Even after our race, we only had maybe a day to actually go out and enjoy it.”

The hard work paid off when the team returned to the States with a bronze medal.

“I saw our time before Elana did as we came down the track and knew that we had placed,” Pac said. “I was already celebrating before we had fully stopped. It really is something that bonds two people. Working so hard together to reach something so huge. I couldn’t have asked for a better teammate. Elana is a great competitor, and she deserves everything she gets.”

Once the team returned home, Meyers shifted gears and started training to be a driver. Already an accomplished brakeman, she wanted to keep competing in bobsled, and drivers have more of a shelf life than brakemen.

“It’s a lot of pressure to be in so much control, and the level of trust the brakeman has to put in me is something I’ve learned to deal with,” Meyers said. “If I make it to the Olympics, millions of people will be watching me. Before I had three seconds of air time pushing the sled at the beginning. Now all the eyes are on me all the way down the track. The pressure is unreal this time around.”