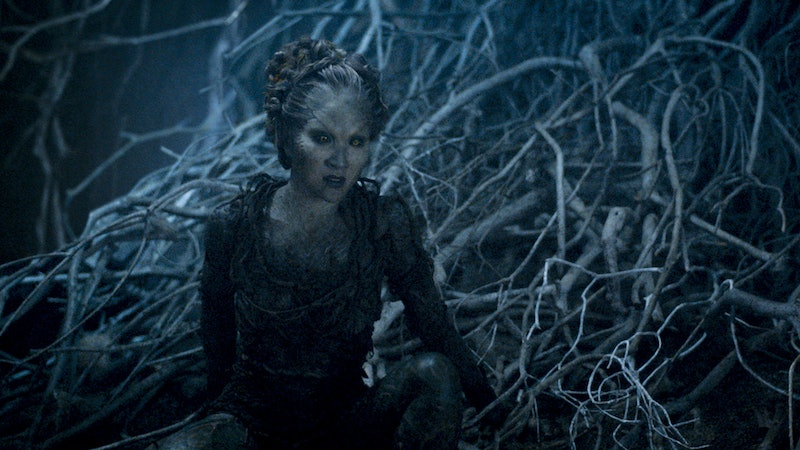 At this point, we're used to dragons on Game of Thrones, and even zombies. However, elves and sprites seem a bit new. Who is Leaf on Game of Thrones ? Bran's tree-dwelling companion, one of the "Children of the Forest" from George R. R. Martin's series, is a bit of a mystery.

The character was last seen lounging in the tree with Bran and the Three-Eyed Raven, then giving poor bored Meera Reed a pep talk. She resembles a little girl who appeared out of the tree and blasted skeletons with magic in Season 4. But are they the same character? Is this a recasting, or are there several girls like this running around in the trees? The actresses have a significant age difference, but both called the little Lord "Brandon Stark" instead of Bran — so I'm not entirely sure.

In the A Song Of Ice An Fire books, Leaf is the only one of the Children of the Forest who speaks the Common Tongue. In A Dance With Dragons she tells Bran that "Men, they are the children" — preach it, girl! Leaf is over 200 years old and used to wander Westeros, observing history, before she got tired and returned to the North and the tree. That means that she can teach Bran a lot, perhaps more even than the Raven can show him. I wonder what she knows?

Are the children elves? The Children are compared to deer, cats, nuts, and actual plants. They are definitely some kind of magical creature. Why does Leaf work for the Three-Eyed Raven? That's an even bigger question. Maybe there just aren't a lot of jobs or friends to be had that far North of the Wall. Maybe they are both part of a master plan that involves House Stark. Whatever it is, I have a feeling that we should keep our eyes on Leaf in Game of Thrones.