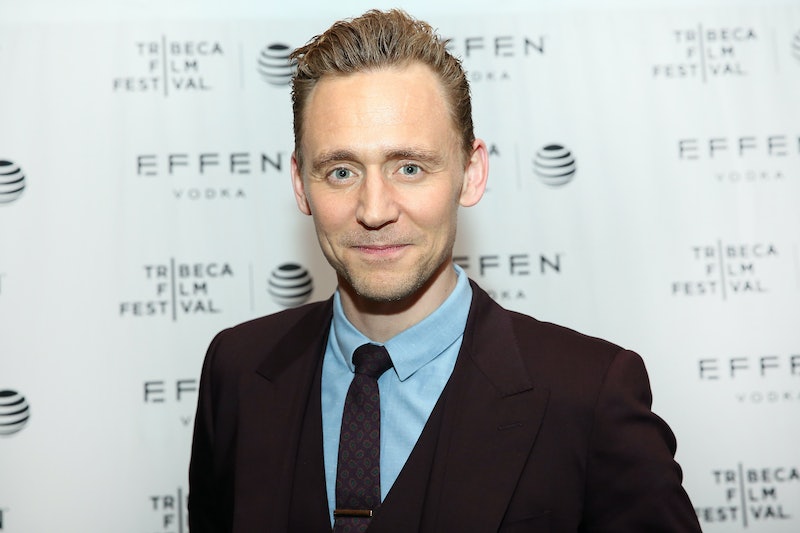 We need to talk about Tom Hiddleston. Marvel's Loki is so much more than just Thor's brother or the villain you'd sacrifice your moral compass for a chance to make out with. Hiddleston has definitely been busy outside of the Nine Realms — his most recent ventures include starring in the mini-series The Night Manager on AMC, portraying country star Hank Williams in the biopic I Saw The Light, and, according to Bustle editor Martha Sorren, eating a dog in the sci-fi indie flick High Rise . (I'll forgive you this time, Hiddleston.) Now it seems that the sought over actor is doing more than just working in film and TV: he's working towards change. Hiddleston just posted a childhood photo in support of UNICEF, and it's officially making us love this actor even more than we thought possible.

The specific reason that Hiddleston is sharing his school photo (complete with what he calls "embarrassing hair") is super important. As Hiddleston states in the accompanying video, the childhood photos help support an initiative called #EmergencyLessons, which helps promote the importance of schools in countries suffering from crisis and conflict. As Hiddleston states in his viral video, schools are more than just places where you learn — they're also where your support system is and where you should feel protected.

In addition to sharing his own photo, Hiddleston is encouraging other people online to share their own favorite school photo, along with the hashtag #EmergencyLessons. Really, it's the best of both worlds: not only do Hiddleston fans get to see an adorable pic of the internet's boyfriend, they also get to help promote education for children living through crisis. It's great that Hiddleston is lending his celebrity to an awesome cause, and here's hoping that more people pick up the torch and share their own cute photos.