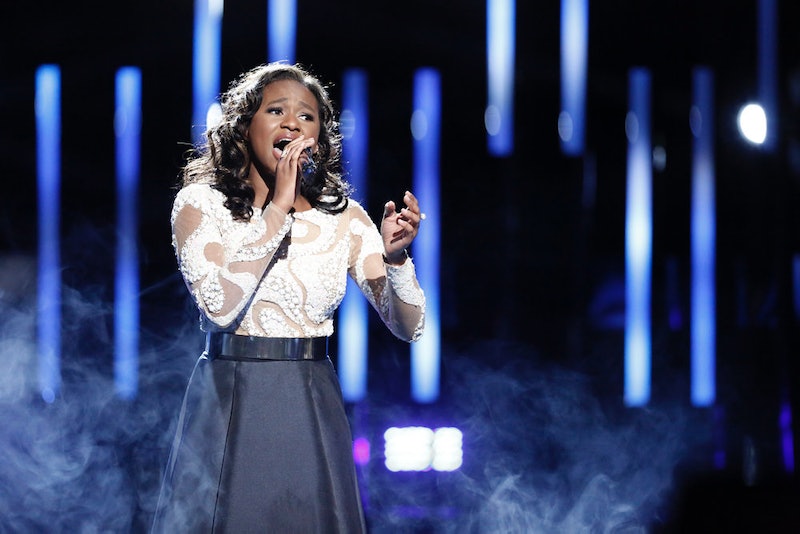 Now that's how you kick of a semifinal! The Voice 's Shalyah Fearing took the stage during the Season 10 semifinals with a powerful rendition of Jennifer Hudson's "And I'm Telling You I'm Not Going" and I'll tell you what, you're going to love it (if you don't already). Though Fearing is the youngest contestant this season, she is certainly one of the strongest — and she proved that tonight. With the biggest elimination of the season looming, the contestants are going to have to give it their all to stay in the game. Fearing did just that, which is why she shouldn't be worried about advancing to next week's finale.

Fearing is certainly an underdog this season. While she's always been good, she's consistently improved week after week which has made her really great. The 15-year-old's performances always impress, but it was tonight's that really showed off her talent. "And I'm Telling You..." is not an easy song to sing, but Fearing took it head on. It was a risk, for sure, but it paid off. At only 15, Fearing proved that she has what it takes to sing with the big kids (well, more experienced artists) and to perform in the finale. And judging from the standing ovation she received, the coaches and America agree.

After two consecutive seasons of male victors, it's time for a woman to win The Voice. While all the remaining females on this season are extremely talented, Fearing certainly has a chance. She's young and hungry, which is exactly what she needs to be to make it in the music industry. As long as she keeps her momentum going with a big performance in the finale, Fearing could have a serious shot at the title — and I, for one, would love to hear her name called at the end.