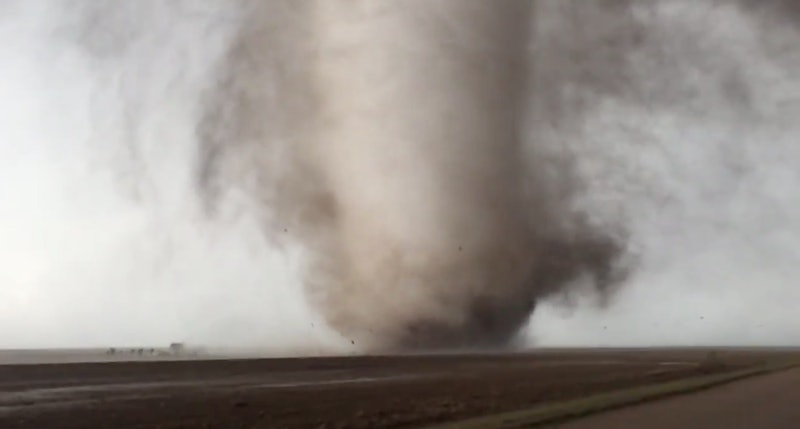 I'm going to preface this by saying that tornadoes are my worst nightmare, so I just assume they are everyone else's too. Earthquakes? Basically a roller coaster. Tsunamis? A water roller coaster. OK, I know they're serious events as well, but ever since I was a kid living in Missouri, tornadoes have absolutely terrified me. This video of the Dodge City, Kansas tornado is a great example of why.

On Tuesday evening, a severe weather warning (if you're from the Midwest, you know the difference between a warning and a severe weather "watch") was issued for several Kansas counties. It began with a severe thunderstorm, but soon turned into a threatening tornado which touched ground near Dodge City, a town of about 27,000 people. Meteorologists at the local news channel repeated urgent directions for anyone in the area to take shelter immediately. According to KWCH 12, officials have already confirmed that damage has occurred.

Meanwhile, two totally separate tornadoes were confirmed to have formed nearby in Lane County and Ness County — and there might even be more than that, as storm systems often include several tornadoes, some large, some small. Late spring / early summer weather is nothing to mess with. Several videos were taken of the Dodge City tornado, including this one by meteorologist and storm chaser Reed Timmer. It's what my nightmares are made of.

The fact that there are no structures or cars or people in the video make it a little easier to watch, but it's still brutal. Let's hope it doesn't move any closer to the city. If you want to make it a little harder to fall asleep tonight, here are some more videos and photos, which show how truly scary weather can be.

I'm never moving back to the Midwest.

More like this
Michigan’s Governor Is “Going To Fight Like Hell” To Protect Abortion Access
By Andrea Zelinski
What To Know About Taking More Than 1 Piriteze Per Day
By Bustle UK
The 6 Best Balaclavas To Keep Your Face, Head & Neck Comfortably Warm
By Jenny White
How To See The Lunar Eclipse On May 15-16, 2022
By Kaitlyn Wylde
Get Even More From Bustle — Sign Up For The Newsletter