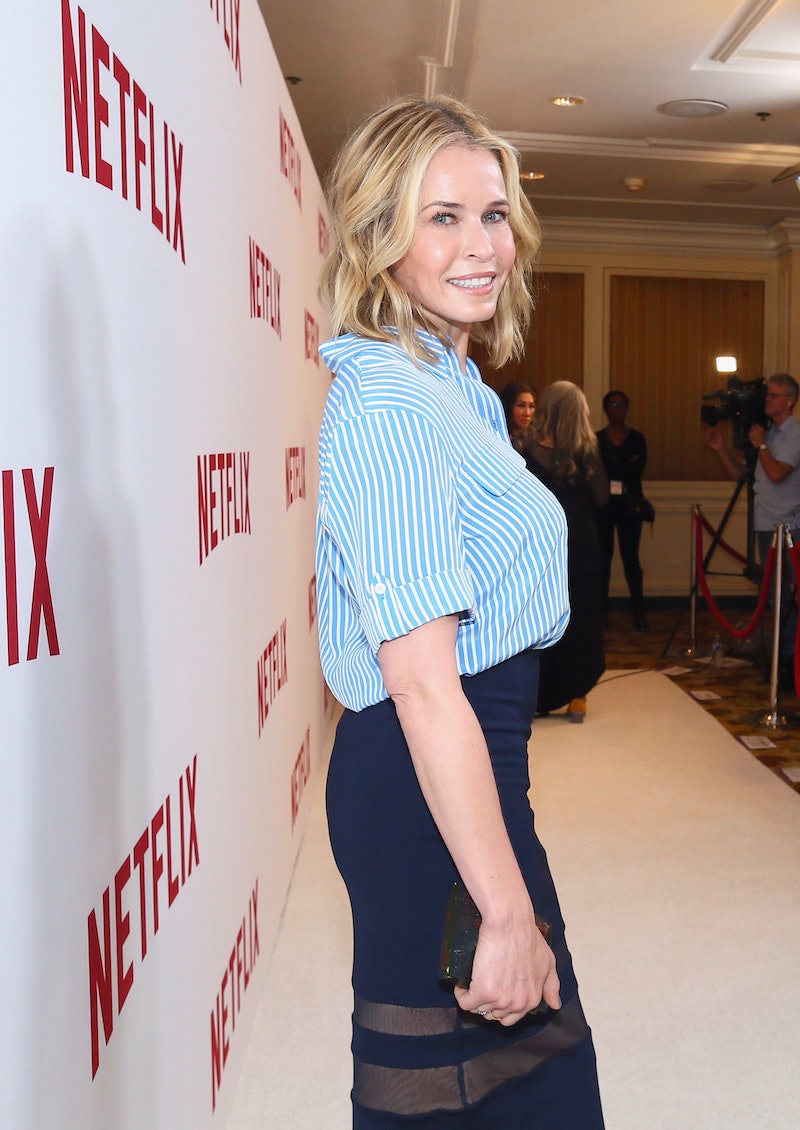 For the second time this season, Chelsea Handler has put a much-needed spotlight on an incredibly important issue that affects children all over the world — including in many of our own neighborhoods and cities. On the May 27 episode of Netflix's series Chelsea, Ashton Kutcher and Cindy McCain discussed human trafficking and what we can do to help. Kutcher is the co-founder of the Thorn Organization, which uses technology to combat the sexual exploitation of children. Cindy and her husband John McCain own The McCain Institute and they each focus on their issues of choice — Cindy's is combating human trafficking.

Kutcher told Handler that he was inspired to form The Thorn Organization when he realized that the exploitation of children is not on enough people's radars. "Everybody is motivated to protect their own children, but collectively it's hard to get government excited about putting investment into it," he explained. Kutcher also provided the sobering statistic that 75 percent of these transactions occur online, which is why his company focuses on providing advanced technology and software to law enforcement officials.

Cindy, who has collaborated with Kutcher in the past, gave an extremely candid and honest answer when Handler asked her how she became involved. "I didn't do something when I could have when I was in Calcutta, [India]," she explained. "I saw it firsthand, witnessed little girls under floor boards... And when I figured out what it was, I walked out. I didn't do anything." She then said said she recognized her mistake and made it her mission to focus on sex trafficking, particularly the exploitation of children.

Handler, Cindy, and Kutcher all emphasized that, although this is a huge issue in other countries, it also happens right here in the United States. And Kutcher cited the deeply troubling but important fact that the average age of trafficking victims is between 12 and 14, according to his foundation's website.

This information will clearly infuriate many viewers (*raises my hand*), so Handler was quick to ask both guests what the viewers could do on a local level to help put a stop to this horrific crime. McCain responded that raising awareness is key — and, sadly enough, some people don't believe it's actually happening. "The biggest hurdle we had in Arizona is making people truly believe that this is going on right here," she explained. And McCain, Handler, and Kutcher all drove home the point that if you suspect any sort of foul play, it's your responsibility to do something rather than stick your head in the sand and hope someone else deals with it. "We collectively have to do something about it," Kutcher said as he urged viewers to visit the Thorn Organization and The McCain Institute websites to check out volunteer opportunities and educate themselves.

At the end of the interview, the three briefly touched on this year's historic election. Although McCain is obviously a Republican, she acknowledged that she may opt to write in a candidate in November. Meanwhile, Handler and Kutcher are staunch Democrats. But, the important takeaway from this interview is that, despite our political beliefs, we can always find common ground and work together on important bipartisan causes like human trafficking. Handler has reminded viewers repeatedly that she's a huge Clinton supporter, but I'm so glad she hasn't limited her guest list solely to people who agree with her political stances. And, during this contentious election season, I think we all need a reminder that common ground can be found when we engage in respectful dialogue and work together.