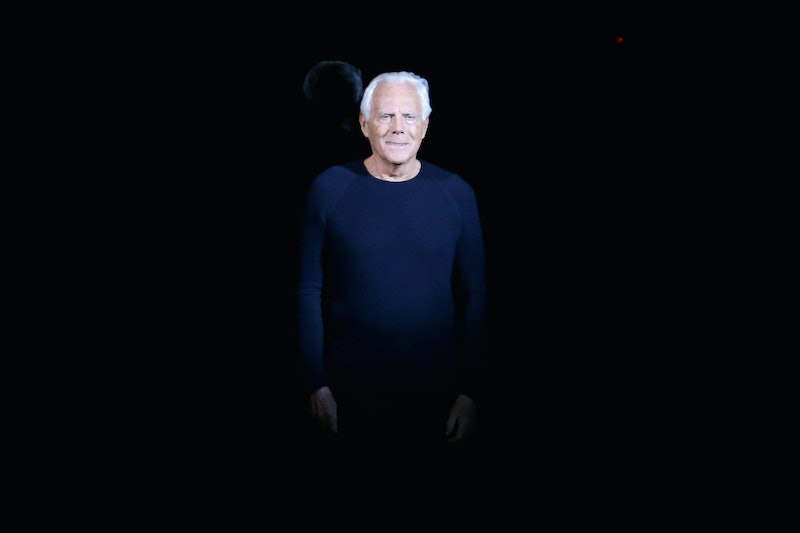 Giorgio Armani isn't happy with Anna Wintour… or Prada, or the Italian Fashion Chamber, or hypothetical absent dentists, for that matter. On Monday, the feisty Italian designer gave what WWD is calling a "postshow press conference" but what we'll just go ahead and call a major rant.

Though he'd just finished another gorgeous show, Armani was seeing red. His rant was apparently provoked by the fact that Anna Wintour missed his show — ouch. The Giorgio Armani collection was the only big-name brand on the last day of Milan Fashion Week, making Armani feel more or less disposable in the grand scheme of fashion shows:

She took an airplane, dumped Mr. Armani and went to Paris…. Why should I always be the moron to be penalized because of a person, who, for better or for worse, like or dislike it, is powerful? I feel penalized. She said she was sending her people. But if you go to see your dentist and he puts you in the hands of his assistant, what’s your reaction?

Armani has always been a big proponent of Milan Fashion Week and Italian fashion by extension, despite troubles the industry has faced in the past. But he's frustrated with the Italian Fashion Chamber's seeming inefficiency in scheduling the five days of shows that some just see as an break between New York and Paris:

When we decided to show the last day, other big brands were involved. But currently this is an empty day. Does this mean protecting the Italian fashion? Where is the Camera? I rejoined it but I can always exit again.

Armani's long been frustrated with fashion designers who design solely with an eye toward the editorial and conceptual; he believes that Italian designers need to focus on fashion that's commercially viable if they want to to save the industry:

I think that the exaltation of the idea that designers can be just completely free to express their fantasy is really dangerous…. Nobody is courageous enough to say that if the fashion industry wants to be supported by the Italian government, we have to offer a product which is not only smoke and mirrors but that has a functionality and can bring economic results. Otherwise, fashion loses its credibility.

Oh, and he had a few fightin' words for specific Italian designers, too. He began the press conference with a dig at Dolce & Gabbana's woodland creature-themed collection, sniping, “I wanted to bring an owl with me this morning." He may have referenced his longtime nemesis Miucca Prada, too: “It’s very easy to do a V-neck dress with a bold print. It’s more difficult to make a suit or a jacket look new. It’s easier to freewheel."

Armani is bitter, no question about it. This is far from the first time he's openly expressed dissatisfaction, and even disdain, for the politics of the fashion industry. His most recent rant may have been a little dangerous, but you have to admire a guy who insists on fighting for the life of his industry, even when he's offended by the goings-on inside it. And who wouldn't be seriously disappointed by an absent Wintour?