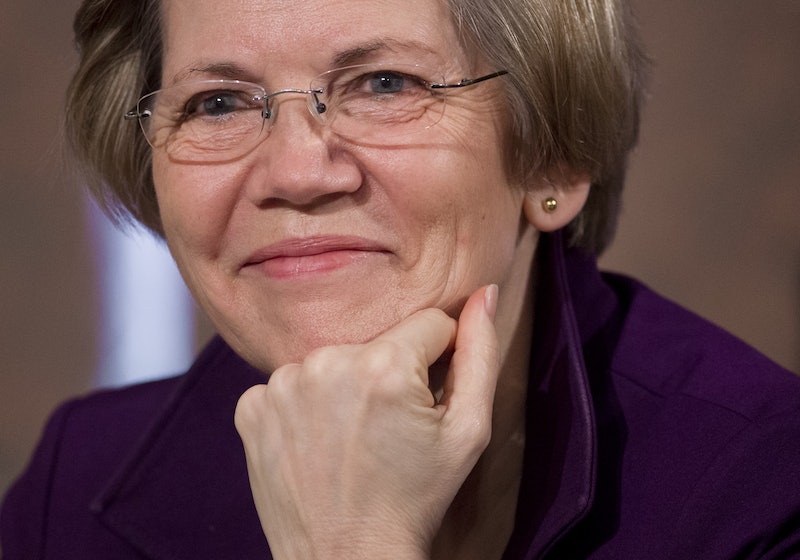 Senator Elizabeth Warren calls 'em like she sees 'em — and this take-no-prisoners style just gave her the most perfect, brutal takedown of Donald Trump ever. Warren has been ramping up the attacks of The Donald lately, and rightfully so — his latest moment of idiocy, in which he declared a judge of Mexican heritage was "incapable" of presiding over the Trump University case, has seen many even in the GOP calling it quits on the candidate. Not to mention, the Massachusetts senator is on a list of viable vice president picks for presumptive Democratic nominee Hillary Clinton, and mirroring Clinton's attacks with a bit of Warren's edge will look good for the potential ticket.

So let's start with Warren's best line: Trump is a "loud, nasty, thin-skinned fraud." (I mean, she isn't wrong.) Beyond that, Warren's main argument lies in the fact that Trump's rhetoric actually matches the rest of the GOP, despite their repeated attempts to distance themselves from the former reality television star.

Particularly concerning (especially given his reaction to the Trump University judge) are the type of people Trump would fill his Supreme Court bench with. Warren calls this out, and is careful to tie major players in the Republican Party right along with him: "Paul Ryan and Mitch McConnell want Donald Trump to appoint the next generation of judges. They want those judges to tilt the law to favor big business and billionaires like Trump. They just want Donald to quit being so vulgar and obvious about it. Donald Trump chose racism as his weapon, but his aim is exactly the same as the rest of the Republicans. Pound the courts into submission to the rich and powerful.”

And this — along with that "loud, nasty, thin-skinned" line — is where Twitter collectively dropped the mic for Warren:

So, with Warren at Clinton's helm, she'll keep taking Trump to task — one brilliant takedown at a time.