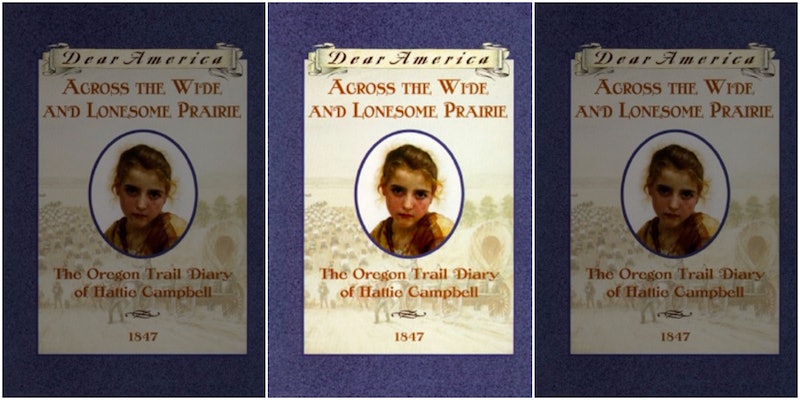 If you missed out on the Dear America books back in the day, then you should know that they were a pretty fantastic series: they were fictional "diaries" of girls and young woman throughout American history. They were educational, feminist, and totally stomach-churning. In retrospect, I'd like to applaud the authors of the Dear America books for not holding too much back. I mean, it's not their fault that American history is a hot mess of genocide and war. Those books kept it real. I just flipped through my old copy of Across the Wide and Lonesome Prairie, and the first line I came across was, "My lips are so chapped they bleed when I talk." Yeah. Dear America didn't mess around when it came to documenting the horrors of life pre-chapstick. And that's pretty vanilla compared to the rest of the books.

So if you'd like to relive some (wonderful, educational) childhood trauma, here are a few times that the Dear America books ruined our childhoods:

1. When everyone died on the Mayflower

OK, so not everyone on the Mayflower died. But I seem to remember a lot of seasickness, and then once they finally get to the so-called New World, a lot more death. There was definitely at least one scene in which Remember (called Mem) watches a child succumb to fever and die in front of her. A Journey to the New World was the diary of a fictional pilgrim girl, but it was pretty brutally real about the hunger and disease the pilgrims faced. A good read if you want to ruin your family's Thanksgiving dinner.

2. When everyone died on the Titanic

To be fair, even as kids we probably knew what was coming with a book about the Titanic (spoiler alert: the ship sinks). But even thought we knew going in that Margaret Ann Brady was in for a traumatic boat ride in Voyage on the Great Titanic , it was still pretty horrifying! Especially since you get your classic give-up-your-spot-on-the-lifeboat moment (PLUS Margaret is poor and an orphan from the get-go).

3. When that one girl got kidnapped twice

A Coal Miner's Bride is, just as you might think, about a coal miner's bride. His thirteen year old bride. It's a tough call whether the most upsetting part of this book was the little girl getting forcibly married to a brutal man with three daughters already, or the realities of coal mining. And there's plenty of beating up coal miners, and later slaughtering coal miners for going on strike. At least Anetka ends up a widow, though, right?

Look, the word "sorrow" is right there in the title. The Girl Who Chased Away Sorrow is the story of little Sarah Nita and her family on a forced march to Fort Sumner, after Navajo land is seized by the U.S. Government. That's a 400 miles forced march. Utterly heartbreaking? Yes, but, like all of these stories based on an utterly heartbreaking reality.

6. When children could be killed for learning to read

In A Picture of Freedom , young Clotee is an enslaved girl secretly teaching herself to read. Her father drowned and her mother was sold far away, and then died. If you're not already crying, I don't know what to tell you. The book is actually slightly more uplifting than some of the others, because Clotee escapes in the end, but pretty much everything up until that point is fairly devastating.

7. When everyone died trying to get to Oregon

Across the Wide and Lonesome Prairie has that winning combination of child marriage, blisters, and death by hemlock. A wagon wheel rolls over a kids arm. A woman drowns. The main character accidentally poisons a little girl and kills her. The moral of the story is stay on the East Coast, I guess.

More like this
We’ve Entered The Hot Boy Reader Era
By Samantha Leach
Prince Harry Incorrectly Recites Christina Aguilera’s “Genie In A Bottle” Lyrics
By Jake Viswanath
Netflix Shut Down 'Bridgerton' S3 Rumours About A “Very Dark” Storyline
By Bustle
Jessica Simpson On The Time She Was Pursued By A Backstreet Boy & An *NSYNC Member
By The Editors
Get Even More From Bustle — Sign Up For The Newsletter
From hair trends to relationship advice, our daily newsletter has everything you need to sound like a person who’s on TikTok, even if you aren’t.