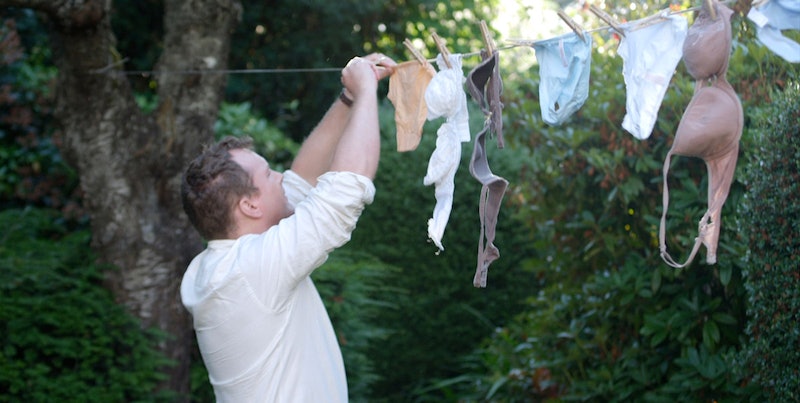 Sure, we can all get a little angry with the opposite sex from time to time. I wish male strangers would stop cat calling me, and I wish my brothers would actually pick up the phone and call my mom on her birthday without a million reminders. I wish my dad would stop bugging me to "stock up" with survivalist gear for when the LA drought rears its ugly head and it's a full blown apocalypse (his words, not mine). But regardless, it would be a pretty grim world if men weren't around. Nevertheless, the mockumentary No Men Beyond This Point pokes fun at a reality where males are literally dying out. Here's the backstory the film gives us: Since 1953 women have been able to have children without the aid of men, and they are no longer giving birth to boys — just girls. Today, over 60 years later, there are very few men left living. The film follows Andrew Myers, who, at 37-years-old, is the youngest man alive. Soon, Andrew finds himself in the middle of a battle to prevent men from going extinct entirely.In this exclusive clip from the film we see three men having a friendly chat outside, but their pleasant conversation is interrupted by a girl who reminds them: "you can't congregate in groups of more than two." Watch the hilarious clip below. The film hits DVD and Digital platforms on July 12.