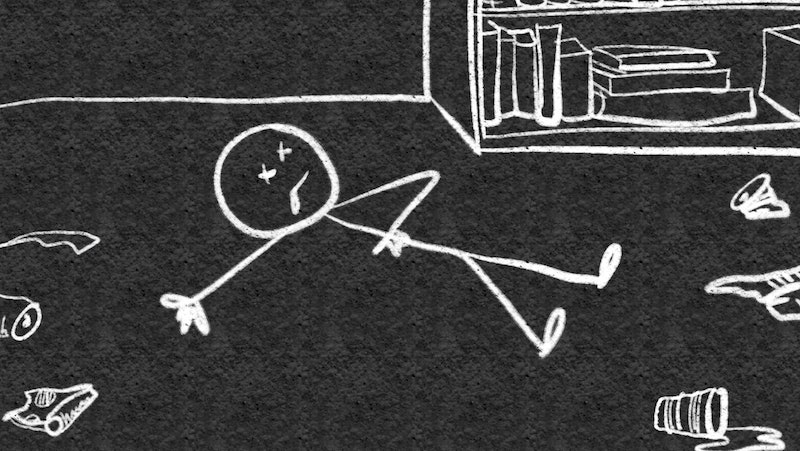 As impossible as it may seem we are still living in a time when we frequently question the validity of sexual assault victims: What were they wearing? Were they tipsy? Was they drunk? Were they walking around alone? Were they asking for it? All of these questions rear their heads with a shocking degree of frequency — even though the only thing they accomplish is shifting the blame from the perpetrator onto the victim. It's a notion that leaves many of us dumbfounded, and an animated video by Blue Seat Studios called "James is Dead" nails why: It perfectly captures the absurdity of victim blaming in sexual assault cases using one simple twist. What's the twist? It maintains all of the typical questions and comments lobbed at victims, but instead of sexual assault, the crime in question is murder.

Imagine that. A horrendous act is committed against an innocent person, but in response, people express doubt. After all, James might've been doing something to encourage his own murder, right? Really, he could've prevented it if he had just done X, Y, and Z... right?

I probably don't need to emphasis how ridiculous these questions sound when heard in this context. We wouldn't hold a victim of murder responsible for the crime carried out against them — so why do we hold a victim of sexual assault responsible for their own attack? Why do the rules that apply to one differ so greatly from the rules that apply to another? They're both victims. A murder victim has no choice or say in the matter; neither does an assault victim.

The whole situation further reminds us of the rape culture we live in and continue to perpetuate. And "James is Dead" really puts it in the spotlight by using all of the most common doubts people express over sexual assault accusations, but in the case of James' murder. Here are just a few of them:

James, you idiot! Didn't you realize you were putting yourself in danger by going off alone? It's your own fault you were murdered!

Because apparently, it's a victim's fault for putting themselves in a vulnerable position — or at least, that's what the belief commonly is for victims of sexual assault: "If they hadn't been alone, maybe they wouldn't have been raped." Shouldn't the real concern here be teaching people not to rape, and taking appropriate measures against those who do? And in case you were wondering, research has found that nearly 60 percent of rapes happen inside the victim's own home. In fact, 66 percent of rapists are known and trusted in the victim's life.

Alone. In a group. Either way, it's never the victim's fault.

"Because alcohol makes it harder to fight off a murderer, and he may have mad some bad choices about who to talk to." Once again, it's James' own fault he was killed.

But drinking is not asking to be victimized — nor does drinking excuse someone who chooses to victimize another person. That's how alcohol during a sexual assault is always framed: If the victim was drinking, it's their fault for getting assault; however, if the perpetrator was drinking, they're not to blame. While it's true that studies has found that about half of sexual assault cases involve alcohol on the part of the victim, the perpetrator, or both, the only person or thing that's to blame for an assault is the person who chose to assault someone. End of story.

"You know how he wears all those V-neck T-shirts ... I'm just saying, if you don't want to get stabbed in the neck, consider wearing a turtleneck sweater or something."

This one has to be one of my favorites — because one can totally determine a woman's sexual interests and intentions based on her wardrobe choices, right? Wrong, wrong, wrong. A woman's clothing doesn't invite anyone to touch her in any way; it doesn't invite anyone to comment on them, either. Thus, it cannot be the reason for her assault. In fact, studies have found that most rapists don't remember what their victims were wearing.

There have been nights when I've enjoyed going out in tight dresses and sky high heels — because I enjoy it. I was not looking for attention from anyone. I simply felt good in what I was wearing. To assume a woman was "asking for it," deserved it, or had it coming because of her low-cut top and miniskirt is utterly horrific.

"He talked to everyone ... So it's no surprise that he eventually met a murderer." This ticks me off, because in this regard, women are screwed either way. If we're on the quiet side and prefer to keep to ourselves, we're often deemed cold, uptight, full of ourselves, or — gasp! — prudes. But make sure you're not too friendly and outgoing, because if you are, and you get assaulted. Well, what did you expect, going around and and talking to everyone ever?

In this case, we're not wondering what the victim did to encourage their rape; we're questioning that it was even rape to begin with. As if blaming a victim for their own assault isn't bad enough, sometimes we're also trying to deny that they were assaulted in the first place. We're seriously trying to erase victims, and pretend they don't exist. That is absurd.

"He's definitely not a murder," right? But let's be real about something: Any individual has the capacity to commit a crime. It doesn't matter how nice you are, or how good-looking you are. It doesn't matter if you have the highest GPA in your school, or if you're really good at a sport or activity. Some of the ugliest crimes have been committed by attackers people never would've suspected. Crime doesn't say, "People really like that guy. He'll never hurt anyone."

But why are we not 100 percent, wholeheartedly sympathizing with the victim of the crime? Why do we care that the criminal is devastated, depressed, not in the mood to eat steak? Let's talk about the irreparable damage caused to the victim. Let's talk about how to support them and help them heal.

This isn't the first time Blue Seat Studios, the team behind "James is Dead," has approached a topic like this; they also brought to life a rather clever tea analogy originally by RockstarDinosaurPiratePrincess, which explains the simple concept of consent by comparing it to offering someone a cup of tea. Their videos are much-needed wake-up calls, putting things into perspective and reminding us exactly what rape culture looks like — and what we can do to end it.

More like this
Sandra Bullock, Girlboss Extraordinaire
By Matt Harkins & Viviana Olen
How The City Healed Five Years On From The Manchester Arena Attack
By Ella Glover
The 'Hocus Pocus' Sequel Finally Has A Release Date & It Makes Total Sense
By Shannon Barbour and Radhika Menon
10 Times Boris Johnson Got It Wrong On Trans Rights
By El Hunt and Sam Ramsden
Get Even More From Bustle — Sign Up For The Newsletter