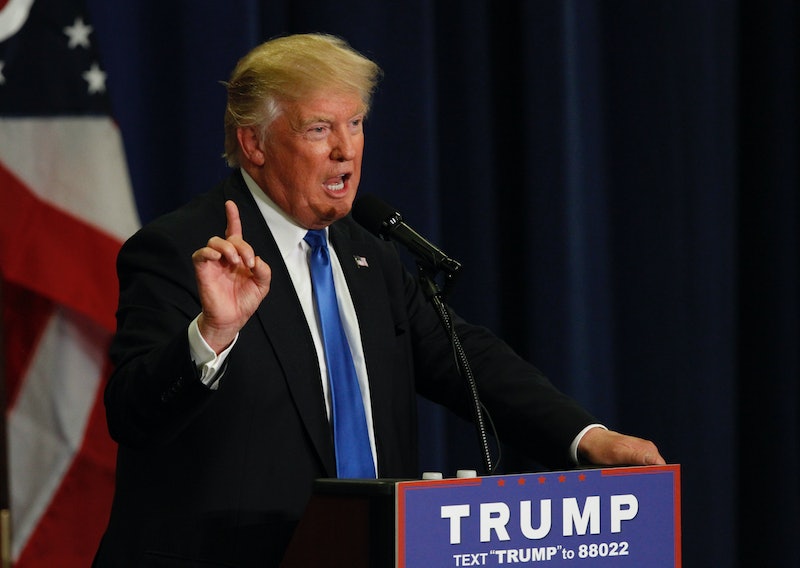 Earlier: On Thursday afternoon, multiple outlets began reporting that Mike Pence will be Donald Trump's Vice President, if Trump is elected, of course. Although the news has yet to be confirmed by Trump himself, many are wondering what Pence's youngest daughter, Audrey, thinks of the Republican presidential candidate. She's a self-proclaimed social liberal, so there's no doubt some of her views don't exactly align with the Donald's POV.

At press time, Audrey has not made any sort of statement regarding her father's reported new role, and she doesn't have a public social media presence, so we haven't seen any tweets (sub or not) on the topic either. Bustle has reached out to Audrey for comment, but has not yet heard back.

Governor Pence is a far-right conservative, with a record of supporting anti-gay marriage and anti-abortion legislation — similar to Trump's current stance.

By contrast, WTHR, an Indiana-based NBC affiliate, reported that Audrey "says she is politically independent, socially liberal and even voted split ticket [in the last election]."

Audrey has made her liberal viewpoints known through her reporting while studying at Northeastern University. Through a co-op with Fuller Project for International Reporting, a non­profit news orga­ni­za­tion based in Turkey, Audrey reported on human rights issues such as bride kidnapping and the Armenian genocide.

WTHR also reported that Audrey voted for her father in the last election because "he proved himself" to her. "Probably the person I get the most respect from is my dad on [being politically independent]," she told the publication. "He tells me so many times, 'I am proud of you for having your own opinions and looking into things.'" So, chances are, she'll support her father and his reported running mate during the general elections, too.