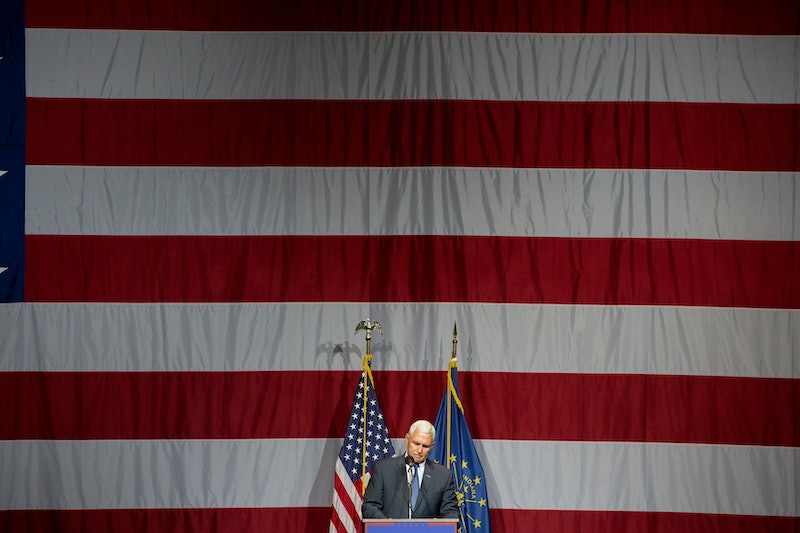 Earlier: Guess what. There are other elections happening this year in America besides the presidential one! Crazy, I know. On Thursday, when a Roll Call report leaked news that current governor of Indiana Mike Pence was Donald Trump's pick for vice president, Pence was campaigning for another term as Indiana governor. The IndyStar reported hours later that Pence would be dropping his bid for re-election in Indiana, to accept the position of Trump's running mate. Now, Hoosiers are wondering, who will replace Mike Pence as Indiana governor, if he's the official Trump running mate?

The Republicans of Indiana are expected to "scramble" to select a new candidate if Pence is chosen by Trump, according to local Fox affiliate, Fox59's, Jessica Hayes. Anyone interested in running for governor has until Friday at noon to submit their name to the Indiana Secretary of State's office. According to Hayes' report, the most likely Republican candidates being suggested are former governor Mitch Daniels, Indiana House Speaker Brian Bosma, and U.S. Representatives Todd Rokita and Susan Brooks. The Indiana Republican State Committee, according to the IndyStar, will then take up to a month or more to decide on their GOP candidate.

If Republicans do not come through with a strong alternative, the governorship of Indiana will go to the Democrat running for the position, challenger John Gregg. If Trump taps Pence, the Democrats have a shot of taking the governor's mansion. Gregg came 3 percentage points away from defeating Pence in the 2012 election.