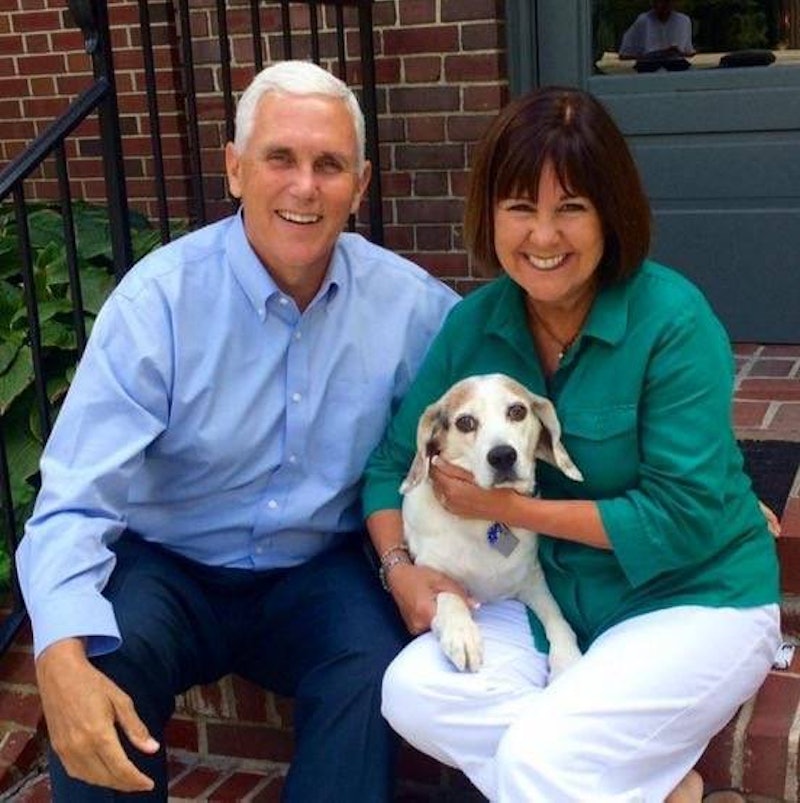 Earlier: Rumors abound that Indiana Gov. Mike Pence is slated to be Donald Trump's vice presidential pick, according to Reuters. Trump's communications adviser is saying he hasn't made a decision yet, but that hasn't stopped everyone from wanting to know everything there is to know about him, from his anti-LGBT policies to his disagreements with Trump to even what his wife, Karen Pence, does. She has taken her career knowledge into her time as first lady of Indiana.

According to her official bio, Karen was a teacher for more than 25 years, having earned her bachelor's and master's degrees in elementary education from Butler University. According to the Indianapolis Star, she taught at several elementary schools after college, and it was while teaching at the Orchard School that she met her future husband.

Karen soon got interested in art — watercolor painting, specifically — and opened her own business selling her work at art fairs. Her specialty, according to her bio, is "watercolors of homes and historical buildings." And once she had the entrepreneurship bug in her, she couldn't stop. She also founded a company called That's My Towel! Charm, Inc., which sells charms and charm holders to attach to towels to remember whose is whose.

Outside of her education career and her businesses, Karen also works as Indiana's first lady on several projects. According to her bio, she created the Indiana First Lady’s Charitable Foundation, which works to "encourage and support youth and families of Indiana." She is the state's official bicentennial ambassador, as Indiana turns 200 in 2016, and she also is the honorary chair of Art Therapy Initiative at Riley Children's Hospital.

The one thing you might be most surprised to know? She's a trained pilot.

More like this
'The Spy Who Died Twice' Is Based On A Major British Scandal
By El Hunt
Graham Norton’s 10 Best Eurovision Zingers Will Leave You Howling
By El Hunt
At 28, Minnie Driver’s Personal Life Was “Falling Apart”
By Kate Dwyer
We've Got A Text! Our First Look At 'Love Island' 2022 Has Arrived
By Sam Ramsden
Get Even More From Bustle — Sign Up For The Newsletter