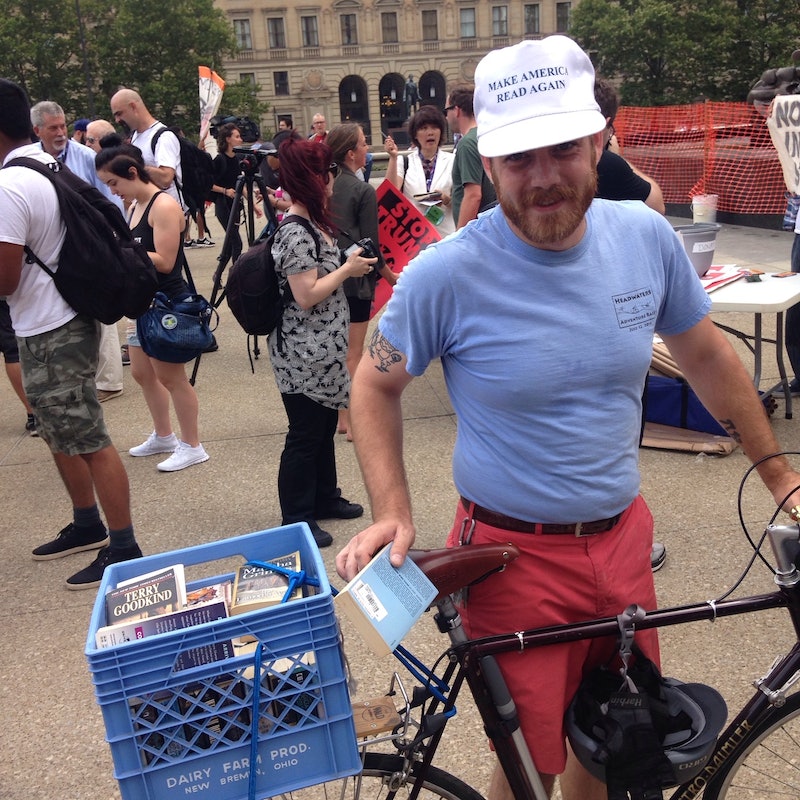 Even before the Republican National Convention was gaveled to order on Monday, the protests on the streets of Cleveland were well underway. But amid the cacophony of people dissenting against the Republican Party and their presumptive presidential nominee, Donald Trump, there was one activist who seemed to have his own unique political goal. As it says on his white baseball cap — modeled after GOP nominee Donald Trump’s own iconic hat — “Make America Read Again.”

John Harris, a librarian working in Tremont, a neighborhood in Cleveland, came downtown with a crate on the back of his bike filled with books and a very literal reading of the city’s guidelines. “Cleveland said you're allowed to hand out literature, so why not come down and hand out some books,” Harris tells Bustle.

Harris says he hasn't done anything like this before, and that "this is a spur-of-the-moment, let's-have-some-fun sort of deal. I've got a couple of days off, so I figured ..."

Although he isn’t at the protests to support or protest any specific candidate, Harris describes his own politics as “probably just to the left of Sanders, which is saying something.” The librarian says, "I have to deal with a lot of Tea Party activism around where I work, and the problem with that is that, well, sometimes we need taxes to fund things, like, I don't know, libraries."

Harris in particular bristles at the idea that libraries are becoming obsolete due to e-books. “The idea of, you know, ‘Well, everyone has a Kindle, why do we need libraries?’ is like saying, ‘Why do we need roads, just give everybody a bucket of asphalt.’ So yeah, there's a little bit of political activism involved in it.”

“It's not like I'm here in support of anybody, but hey, a little reading can't hurt anybody.”

Still, Harris’ main message centers around reading. “Mostly we're just here going, 'Hey, literacy is awesome,” he says. “Read a book while you're bored. It'll be something that'll be easier on your phone battery than catching a Pokemon.”

More like this
5 Gripping Books To Read From Women’s Prize For Fiction Winner Ruth Ozeki
By El Hunt
16 Novels That Paint A Realistic Portrait Of Abortion
By K.W. Colyard
How A Political Staffer’s Death Became The Center Of Alt-Right Conspiracy Theories
By Gretchen Smail
10 Must-Read New Books Out This Week
By K.W. Colyard
Get Even More From Bustle — Sign Up For The Newsletter