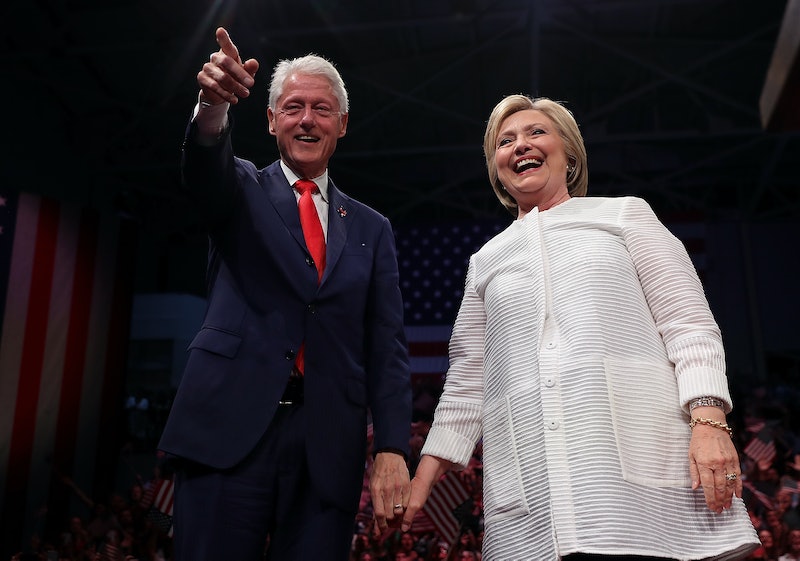 Immediately after Hillary Clinton became the first woman to receive the official presidential nomination from a major political party, her husband and former U.S. president Bill Clinton tweeted his support for Hillary and her historic shattering of the "glass ceiling."

"So proud of you, Hillary," Clinton tweeted after the 2016 DNC roll call came to a conclusion. Clinton, who has made several campaign appearance for his wife, is no stranger to the DNC, but now the shoe is on the other foot. Just some 20 years ago, it was Hillary Clinton who took to the DNC stage to speak about why Bill Clinton should be elected the 42nd president of the United States. And she was alongside him throughout his political career, including his 1978 campaign for the Arkansas governorship.

Also, in a historic symbolic gesture, Sen. Bernie Sanders made another motion toward party unity by motioning that the convention suspend procedural rules when it came to counting the delegate votes for the state of Vermont, which coincidentally, was the last state to undergo roll call.

"I move that the convention suspend the procedural rules. I move that all votes, all votes cast by delegates, be reflected in the official record. And I move that Hillary Clinton be selected as the nominee of the Democratic Party for president of the United States," Sanders said.

Clinton received a total of 2,842 delegate votes, emerging with more than the 2,383 votes required to secure the nomination. Sanders, who threw his support behind Clinton during the first night of the Democratic National Convention, received 1,865.

Bill Clinton will be delivering a highly- anticipated address at the convention on Tuesday evening, which will be his 10th appearance at the DNC.