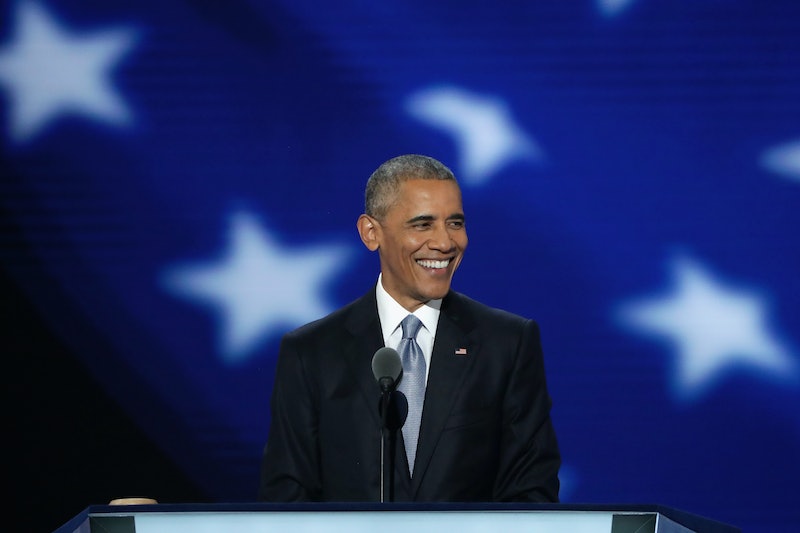 President Obama always knows how to move a crowd, and Wednesday night at the Democratic National Convention was no exception. His unmatched oratory skills were on full display when he gave an impassioned speech boosting Hillary Clinton, promising to "pass the baton" to the Democratic presidential nominee. Throughout his own campaigns to be president, Obama spoke much of hope — hope in the country, in the American people, in our collective future. Wednesday night, Obama said that American voters had fulfilled their end of the deal, often giving him "hope in the face of difficulty." "Proud to be an American" is the only way you could sum up people's reactions to learning that, however indirectly, they helped the coolest POTUS in history.

In an election cycle that has often left Americans feeling a strong sense of secondhand embarrassment for their country, POTUS's speech completely turned that feeling on its head. Instead, Twitter was 100 percent there for America. As of Thursday morning, both "POTUS" and "Barack" were still trending on the site, hours after the president's speech.

It seems like one of the DNC's biggest accomplishments so far is making Americans bleed red, white, and blue (and hey, it isn't even the Fourth of July).

Thanks for being so awesome, POTUS. *quietly chants "Four more years!" until the end of the general election*

More like this
What Is Barack Obama’s Net Worth? He Makes *Way* More Now As An Ex-President
By Hugh McIntyre
How To Support Gun Control Reform Right Now
By Morgan Brinlee and Carolyn Steber
Taylor Swift, Kerry Washington & More Speak Out On Uvalde Mass Shooting
By Jake Viswanath
TikToker Kate Glavan Has The Antidote To The “Hot Girl Walk”
By Alexis Morillo
Get Even More From Bustle — Sign Up For The Newsletter