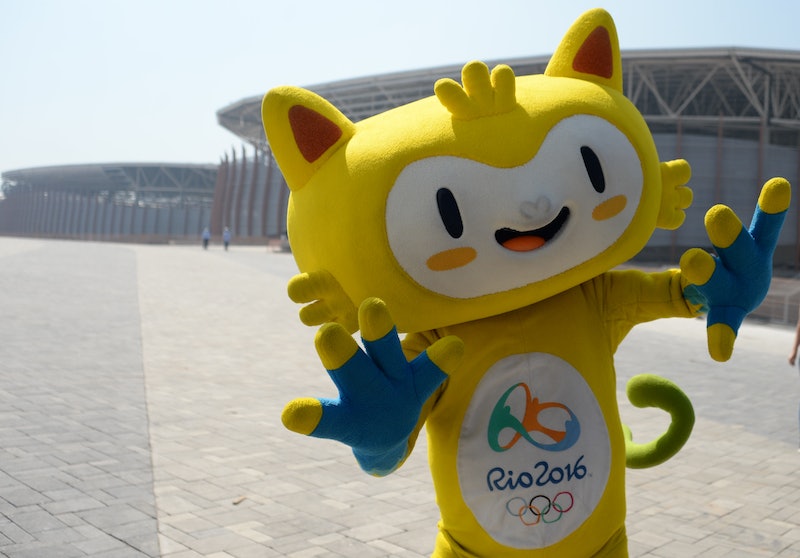 Settle down, Pokémon Go folks, this isn't a rare grab. The only way you'll be able to, ahem, catch the yellow cat-like creature Vinicius is at the Rio Olympics as the official mascot for the games. And despite its Pokémon-esque moniker, the mascot was created and named well before the Nintendo craze took hold of the world again. So what does Vinicius mean? The Rio Olympics mascot pays tribute to a famous Brazilian.

Rio introduced Vinicius to the world on Nov. 23, 2014, the winner of a nationwide contest announced in November 2012. Vinicius is described as a mixture of several Brazilian animals, including cats, monkeys, and birds, who was born out of the "explosion of joy" after his country was awarded the hosting rights to the Olympic games. Vinicius is a pretty impressive animal, who has the ability to stretch his arms and legs as far as he likes. He also can imitate the voice of all animals, which makes traversing through the diverse country easy.

The mascot is named in honor of the Brazilian musician Vinicius de Moraes, who died in 1980. Although he is credited with writing several classic Brazilian songs, his namesake was far more than a poet. Vinicius de Moraes was also a playwright, a diplomat, an essayist and a poet — whose nickname, "O Poetinha," means "little poet."

Vinicius de Moraes was a seminal 20th century cultural icon in Brazil, who was in step with the yellow version's mission to "spread joy throughout the world and celebrate the friendship that flourishes between people from all over the world."

Vinicius is joined by Tom, the Paralympic mascot who kind of looks like a friendly vegetable, and has the ability to pull any object out of the mop of green on his head. Tom is also named for a famous musician, Tom Jobim, and is designed to represent the flora and fauna of Brazil.

Fittingly, the two mascots made their public debut at the Ginásio Experimental Olímpico Juan Antonio Samaranch, a school opened to coincide with the Rio Olympics that hones sports talent. Because nothing says "run faster" like a cartoonish yellow cat and an animated broccoli.

So, no. You can't catch Vinicius or Tom in a Pokéball, but you can enjoy their frolicking throughout the Olympic Games, which run from Aug. 5 to Aug. 21. It'll be a welcome substitute for a country that doesn't have Pokémon Go as of yet.