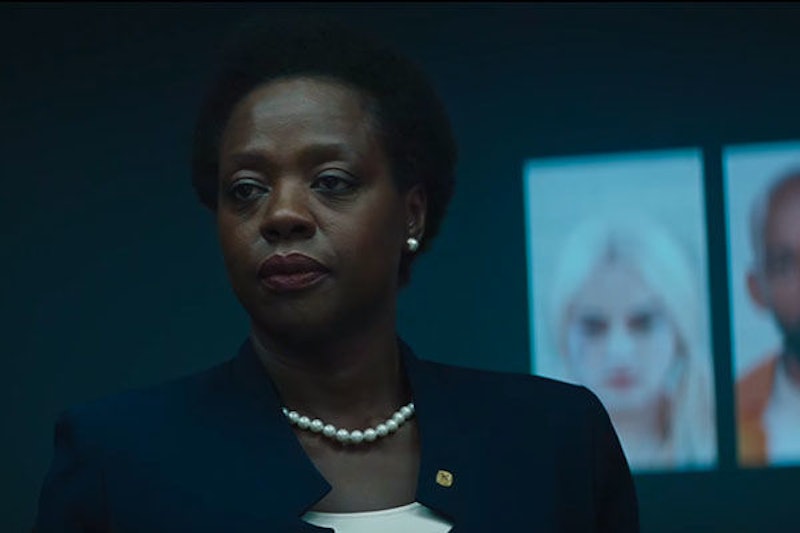 Prior to the release of Suicide Squad, most of the fans' (and the general public's) anticipation seemed to be reserved for the film's heavy hitters: Jared Leto's Joker, Margot Robbie's Harley Quinn, and Will Smith's Deadshot. Now that the movie has arrived, all of those characters are rightly receiving praise, but one surprise fan favorite that's emerged is Viola Davis' Amanda Waller. The brains behind the Suicide Squad is ruthless, intelligent, and inspiring, and basically everyone wants to see more of her. But will she return for a future DC movie? Will Amanda Waller be in Justice League ?

She might be. So much of Justice League is unknown at this point (the plot is still largely a mystery), and not all of the cast has been announced. Other supporting characters from elsewhere in the DC universe, like Lois Lane and Alfred Pennyworth, are believed to be appearing in the film, so bringing in someone like Waller wouldn't be too much of a stretch. Her character does after all cross paths with many different heroes in the comic books thanks to her role as a high-ranking government agent, and the movies could hypothetically even use her in a more antagonistic Nick Fury-type role if they so desired. Also, other than the fact that it would just make sense for her to show up in Justice League, there is some real evidence that supports her doing so.

In the post-credits scene for Suicide Squad , Amanda Waller (spoiler alert!) has a meeting with Bruce Wayne where they briefly discuss the "metahumans" Bruce started investigating in Batman v Superman . She gives him the files on The Flash and Aquaman, and he goes on his way, effectively leading into Justice League where he's seen trying to recruit these characters in the trailer. This implies pretty clearly that Waller plays a role in the Justice League's creation, so her inclusion in the film would definitely make sense. Also, Viola Davis revealed to Rachel Smye of the New York Times last year that she is signed on to play Waller in a total of three DC films. Suicide Squad is the only one that's been confirmed so far, but Justice League would fit in nicely as the second.

It's unknown at this time if Amanda Waller is in Justice League, but given the character's far-reaching connections, her role in setting up the team, and the fact that Davis is returning to the DCEU eventually, an appearance in the film is definitely a possibility.