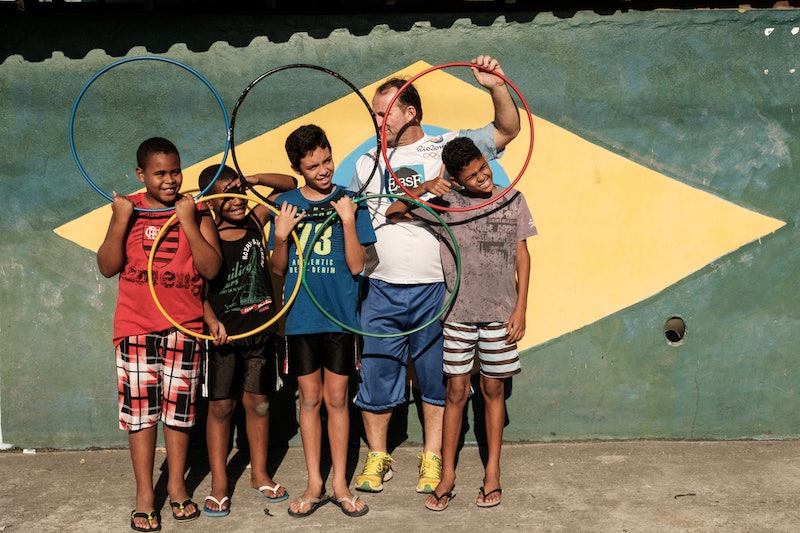 When the Olympics begin in Rio, athletes from all over the world will come together for some incredible events. Personally, I'm there mostly for the fireworks and team uniforms, but often, I'm pulled in by the stories behind the games — including the charitable programs that go hand-in-hand with the Olympics. McDonald's, for instance, a longtime corporate sponsor of the Olympics, is giving children from 17 different countries a huge opportunity through the McDonald's Olympics Kids Program, sending them to the Rio opening ceremony. Get out your tissues — it's pretty darn sweet.

While McDonald's has been sending children to the Olympics since 2008, this marks the first year that the corporation has invited them to the opening ceremonies. According to a press release from McDonald's, the Olympics Kids Program picked out children who "embody the spirit of friendship." The kiddos will join a gang of former Olympians and their children, including U.S. Olympic gymnasts Bart Conner and Nadia Comaneci and U.S. Olympic swimmer Dara Torres. That already sounds pretty cool, but it's actually just the start. The McDonald's Olympics Kids Program is also a chance for each home country to give back, as the program connects to the Ronald McDonald Houses, where families of hospitalized children stay during medical treatments and procedures.

The U.S. sent two children to this year's program: 12-year-old Hana Allen of Missouri, and 9-year-old Darius Ziabakhsh of New Jersey. Both kids are patients at the Cincinnati Children's Hospital Medical Center, and they were each shocked by the news that they were chosen for the program and would be attending the Rio opening ceremony. "Hana’s doctors and nurses from Cincinnati Children’s Hospital helped surprise her via Skype," KSHB, a local news channel in Kansas City, reported. Ziabasksh, meanwhile, spent time at the Ronald McDonald House while battling a cardiac illness, yet with the support of his family, he kept his chin up and has stayed positive throughout the process. He was surprised by his invitation to the Olympics at a sporting event in Cincinnati.

Here's wishing the two children happy travels and plenty of opportunities in Rio to celebrate their incredible strength.