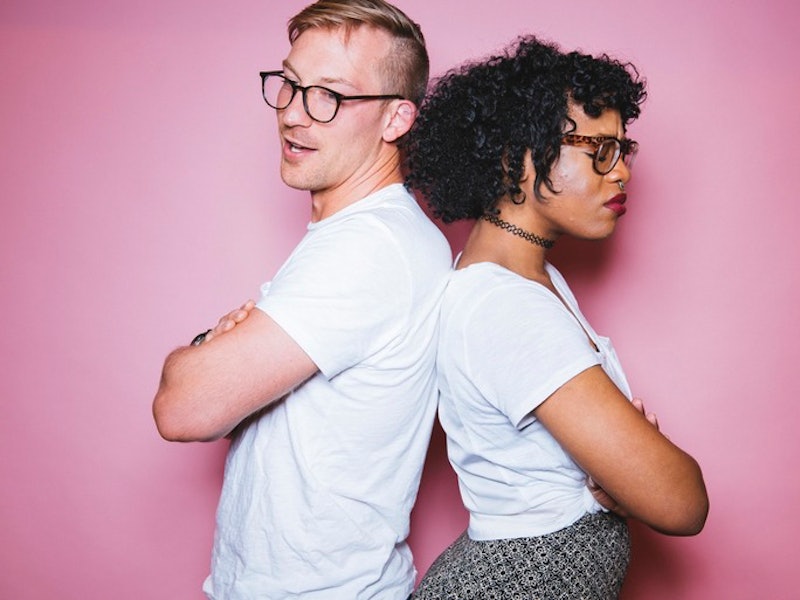 Everyone in a relationship has fights — that's a fact, but some are way worse than others. We've all had those horrible relationship fights with a partner. The kind that start out about a dirty sock and four hours later have spiraled into some debate about why they didn't go to your best friend's birthday party three years ago. The worst and most common fights in a relationship are often these horrific, cyclical debates until neither of you remember what you were talking in the first place... but you both know you feel like sh*t. It's no fun at all.

But this happens so often because we have a tendency not to what to confront larger problems directly, instead we avoid it and then just overreact about smaller things that set us off in a similar way. It's indirect and childish, but we all do it.

"I think that relationship fights are often about bigger things. One of the most common fights that couples find themselves in is a fight about keeping score," relationship therapist Aimee Hartstein, LCSW tells Bustle. "Many couples feel a need to keep a running tally about exactly what they are doing to contribute..." These kind of fights— where you have been keeping track of resentment and letting it build without saying anything — means that any little thing can put you totally over the edge. And then you're fighting about something you weren't even mad about in the first place.

Here are seven fights that are about something bigger, because no one is that angry about the dishes:

1. Why The House Is Messy

Every single frustration in your life can be channelled and funneled and distilled into who hasn't done the effing dishes. Or who changed the toilet roll last. Or who buys the soap more often. It's crazy. Remember what Hartstein said about keeping score? A lot of that can be a household stuff. "This is probably the most popular fight couples have — especially when children come into the picture. On the surface it seems like it’s about exactly that," Hartsein says. "But the reason it’s such a ubiquitous topic is because the person who is complaining that they are shouldering the bigger burden is really looking for some kind of love and validation. If one or both partners stop to tell the other how much they appreciate and love them, the fight is generally stopped in it’s tracks."

Yeah, there might be the occasional night one of you is more into going out and the other wants to stay in— and that shouldn't be a problem. You both should have friends and other people to spend time with. But if it's a constant source of strain in your relationship then you're fighting about a bigger incompatibility — one that you need to stop avoiding and start facing.

3. Whose Friends You're Seeing

My girlfriend and I both love to spend time with our friends, separately and as a couple. And we always manage to have time to do it. But if only one of you is making an effort with the other's friends or there's always an excuse for why your partner isn't seeing them, then what it's actually about is your partner not making an effort into making you feel comfortable. And that's something much bigger.

4. Where You Spend The Holidays

Even more than friends, spending time with family is often about considering each other equal parts of the relationship and respecting each other's needs. It's always going to be tricky figuring out how to split holiday time — there's never a right answer. But if rather than just some awkward negotiate it turns into all out fighting, it's normally a sign that one partner is just not respecting the other's family and time and expect their partner to just slot into their life. That's a much bigger injustice. It's normal for it to be difficult, but it shouldn't be completely unfair.

5. Being Jealous Of Someone There's No Reason To Feel Jealous About

Jealousy is natural to a degree. My girlfriend and I will tease each other about other people who show an interest in us— but it's definitely only teasing. We know neither of us would ever go for it. If there's actual jealous and accusations popping out, it's a sign of a general insecurity of the relationship. You or your partner should never actually feel in danger of being cheated on. That's not OK. If you're feeling jealous about people in your partner's life, you need to look at the lack of security in your relationship.

"They don't think anyone else can appreciate you the way they do, or you're so amazing that they believe everyone loves you as much as they do and can't bear to share you,"marriage and family therapist and relationship expert Esther Boykin told Bustle. "These kinds of statements can sound grand, and flattering even, but the underlying insecurity and attempt to control are not the foundation of a lasting love affair."

The sex fight is such a common one — but it's normally way more about intimacy, or just your relationship generally, then actually needing an orgasm (I mean, you can still masturbate in a relationship, amirite?). "Probably the second most popular topic to fight about is sex," Hartsein tells Bustle. "Stereotypically [in heterosexual relationships] he wants more sex and she wants more cuddling. Ironically both partners are really looking for the same thing. It might appear that he’s just looking to get laid and that she’s not even that interested in sex. If we look underneath the surface a bit, it becomes clear that they are both looking for love and validation. He feels a bit rejected because she isn’t wanting to have sex as much as he is. In his mind, they connect through sex. She’s feeling a bit rejected because she thinks he only wants to have sex with her and doesn’t want to be close in any other way. Traditionally (although certainly not true for everyone) men use sex as a way to help them feel close to their partner. They feel badly when their partner isn’t interested and women need to feel close in order to have sex. She may feel badly that he seemingly only wants to have sex rather than talk and cuddle. As in most situations, the best remedy is to communicate their feelings and give your partner a little of what they are asking for."

We all know social media and phones can ruin our relationships, but a lot of the time if one of you is feeling left out by the other's phone use, there's also possibly a trust issue at play. Our phones are own personal universes and if your partner is commenting about you being on it too much or wants to have access to it, then they may not trust what's going on in that personal universe of yours. You need to get to the bottom of it, because — whether or not their fears are justified— it's going to cause some relationship problems.