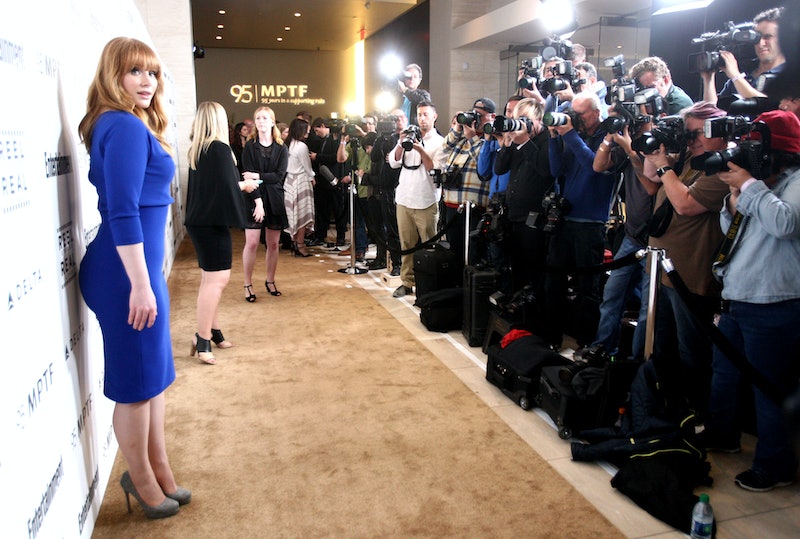 As a curvy woman just shy of 5’2’’ myself, watching Bryce Dallas Howard grace the screen in Disney’s latest family-friendly venture with her glorious womanly figure was nothing short of a sight for sore eyes. The 35-year-old, fond of giant, on-screen reptiles these days, seems to effortlessly ease through her hectic balancing act that is life, and more importantly, remain happy while doing so. In addition to shooting the latest installment of the Jurassic World franchise, the mom of two and wife returned to the states from New Zealand to promote Pete’s Dragon (out August 12) — all while continuously owning (and refusing to change) her voluptuous body, no matter how many cameras are snapping her picture amidst the chaos.

But why does seeing Howard in Pete’s make women like myself, so small in the grand scheme of Hollywood glamor, feel some sort of personal victory? Because not only do we gain a role model, but I’m thankful that all of the young, insecure and unsure girls who watch this film will as well. While Howard is thankful for the opportunity, she doesn’t go without applauding fellow celebrities who helped her get to the point of fully accepting and embracing all of who she is.

When sitting down with Howard, who’s a living ray of sunshine, I immediately cut to the chase and approach her with, “You know you have a curvy figure.” A tad aggressive, I’ll admit, and while some celebrities could be put-off by such an opening line, Howard laughs and nods, warmly accepting my statement. Clearly, I’m not the only one who’s noticed her kickass, bountiful bod. But after being raised in a famous family, enduring years of the spotlight and public scrutiny, she continues to have one simple mindset when it comes to her body: What you see is what you get.

No matter what role she’s up for, she refuses to drastically change for anybody. “Honestly, as an actor, you can kind of offer yourself and that’s it. Sometimes you get hired for some things and sometimes you don’t get hired for others,” she explains. That said, she appreciates every casting director who has whole-heartedly welcomed her in the past. “I have a lot of respect for the folks who have hired me and never said anything about [my body]. It’s just about the character and who’ve embraced that as well,” Howard says.

I go on to praise her for so confidently and gracefully being a new, different kind of role model in the Disney hemisphere. “That’s a good thing," she says, smiling. "And I also think that things are changing. I really, really do.”

Reflecting on her journey to self-love, she’s semi-hesitant before saying what comes next: “In the weirdest way, I don’t know if I should, eh, well I guess it’s an OK thing to say, but, I think for me even, the Kardashians did a lot.” At this moment, I applaud her even more. Hearing her acknowledge the body positivity that the famous family helped cultivate over the years, especially when they get so much crap from haters every day, is basically an explosion of girl power right before my eyes.

Love or hate the Kardashians, no one can deny that Howard’s point is completely true. She explains how watching Kim, Khloe, and Kourtney rock their curvaceous figures significantly impacted her self-esteem. “Even for my figure, I was like, ‘Oh!’ Like, really embracing those curves,” she says. “I have a serious badonkadonk, to embrace that has been [amazing]. I feel like even clothes have changed a little because of those ladies.”

Thanks to all of these women, change is still happening, self-acceptance has never been sexier, and to me, this female comradery is what true Disney magic is all about.