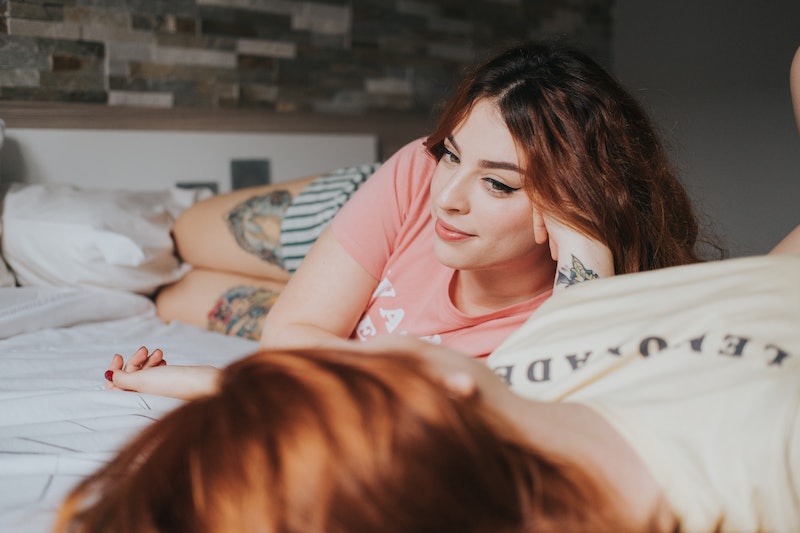 Sexual dysfunction is predominately associated with old age, but a new UK study reports that Millennial sex issues do exist, and 44.4 percent of women and 33.8 percent of men aged 16-21 are dealing with them. Analyzing the sexual habits of young Brits, the National Survey of Sexual Attitudes and Lifestyles sheds light on a variety of intimate problems. Some have to do with physical responses, like dryness and pain, while others have to do with psychological responses, like anxiety.

For many, early sexual activity is remembered in a hazy glow of nostalgia. Innocence and inexperience only made every touch more thrilling and taboo — something you'll never get back once you're more acquainted with getting it on. Then, there are those who remember it differently. Sure, there was pleasure, but also the fumbling and figuring out what goes where and what the hell do you even do with that thing. In short, it's no shocker that young people have issues with their sexuality, because it's uncharted territory, so why wouldn't they need some guidance?

As The Guardian notes in their coverage of the UK sex survey, "young people need help with their 'sexual function' as much as advice on avoiding sexually transmitted infection or unintended pregnancy."

9 percent of women surveyed had pain during sex. The American Congress of Obstetricians and Gynecologists say that 75 percent of women at some point experience pain during sex, so this is pretty common. Diagnosing the underlying cause can be tricky, however, and should involve a gynecologist. Possible causes range from an STI like chlamydia to uterine fibroids to vaginismus.

21.3 percent of women surveyed expressed trouble reaching orgasm. (Conversely, 13.2 percent of men complained of climaxing too fast.) This prevalent sexual issue for women can occur regardless of age, and is impacted by a host of mental and physical factors. But when you're dealing with two inexperienced people, the likelihood is even higher that climax isn't guaranteed — although these positions might help.

8.5 percent of women surveyed described an uncomfortably dry vagina during sex — which can also cause painful sex. Although lube is the perfect prescription for too much friction, desert-level dryness can be a sign of underlying health problems which you should definitely consult a doctor about. Allergies to detergents and certain medications are sometimes the culprit, as is lack of foreplay and/or arousal.

8 percent of women surveyed mentioned diminished arousal during sex. Since the point of sex is to enjoy yourself — and someone else — lack of arousal can be insanely frustrating. Sometimes the key is more foreplay, like, a full half hour if need be. And sometimes your body isn't into it because of internalized shame about sex, or, maybe, the person you chose to hook up with just isn't a good match for you. This issue is complex, so it's a good one to carefully explore when you first encounter it.

8 percent of women surveyed reported anxiety during sex, while only 4.8 percent of men said the same. There are lots of ways to overcome nerves in a sexual encounter, and maybe experience is all you need to be more confident. However, no matter your age or expertise level, it's critical to communicate with your partner, take it slow, and remember saying "no" is ALWAYS an option if you're uncomfortable with what's going down.