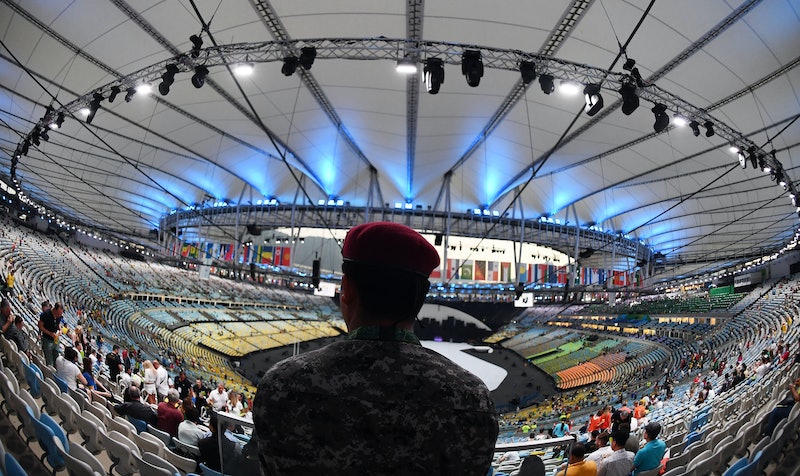 After four long years of waiting, the Summer Olympics is finally back. The eyes of the world are on Rio de Janiero Friday night as the highly-anticipated games begin, starting with the opening ceremony in Rio's Maracanã Stadium. With the proliferation of digital technology, the Olympics have become an even more global event than ever, and one of the most enjoyable byproducts of that globalization are the jokes online as the world watched the ceremony from Rio together. The Rio Opening Ceremony memes and jokes didn't dissapoint, even in context of their predecessors, and succeeded in making Rio one of the most enjoyable opening ceremonies of all time.

The last few Olympics have produced some stellar memes, most notably Queen Elizabeth skydiving with James Bond and being a super sassy monarch, the startling similarities to The Lord of the Rings movies, and the iconic missing fifth Olympic ring. But the Internet brought its A-game, perhaps partially aided by some leaks of the Ceremony earlier this week. Even if there was a little preconceived joking tossed in, the results are still hysterical. Check out these hilarious Rio opening ceremony jokes and memes to see the funnier side of the Olympics:

May the odds be ever in Team USA's favor during this year's Olympic Games.

More like this
Twitter Was Saying The Same Thing About Sam Ryder’s Surprising Eurovision Result
By El Hunt
Taylor Swift, Kerry Washington & More Speak Out On Uvalde Mass Shooting
By Jake Viswanath
Photos Of Boris Johnson Drinking At A Downing Street Lockdown Party Have Surfaced
By Bustle UK
Twitter Is In Utter Meltdown After 'Derry Girls’ “Poignant” Finale
By Sam Ramsden
Get Even More From Bustle — Sign Up For The Newsletter