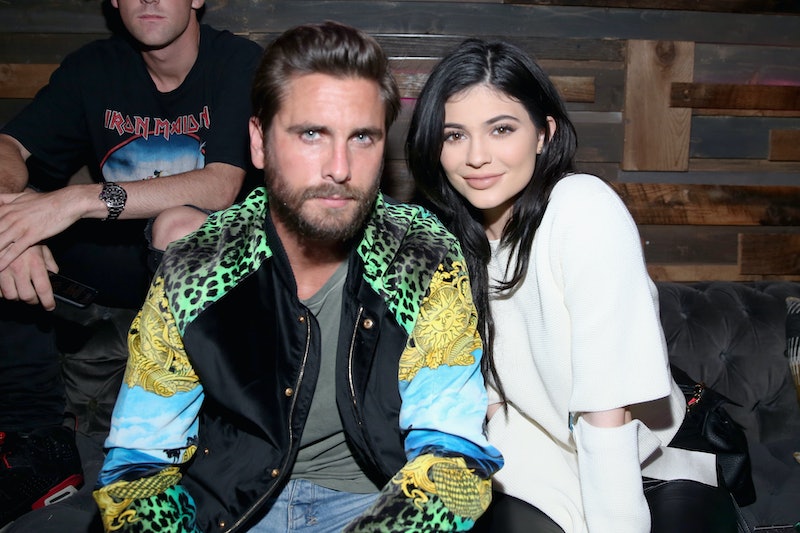 After watching more than an hour of footage from the Kardashians' latest family vacation on Keeping Up With The Kardashians, I'm experiencing some major FOMO about this trip to Cuba — and I'm not the only one. A certain member of the family was left behind, and he's feeling pretty left out. On Sunday's new episode, Scott Disick tries to bring Cuba to LA, and even though he doesn't quite get everyone else on board, he was pretty successful at recreating the experience.

Scott wasn't the only one left behind, either. Kylie and Kris were also at home while the rest of the fam were off having the time of their lives, so Scott decided to do something about it. Not only did he bring over Cuban takeout while playing loud Cuban music via his iPhone, but then, he took it up a notch. Later, Scott and French Montana rolled up to Kylie's house in a vintage, brightly colored car — complete with fedoras and cigars for everyone — for a drive.

It was actually a pretty cute attempt, especially since Kris was feeling lonely without being able to talk to her older daughters thanks to the lack of phone service in Cuba. But unfortunately, she and Kylie weren't as into it as Scott had hoped.

But don't worry — things got way better. Once everyone got home, Kourtney and Khloe threw a big Cuban dinner party for Scott and Kris so they could bring Cuba to them. There was a live band, there was tons of food, there was even sangria and salsa dancers dressed exactly like the emoji. And Penelope playing instruments was the adorable cherry on top of an awesome get together. s

And really, this party was just more proof that no matter what happens, Scott will always be a part of their family. Seriously, how heart warming is that?!