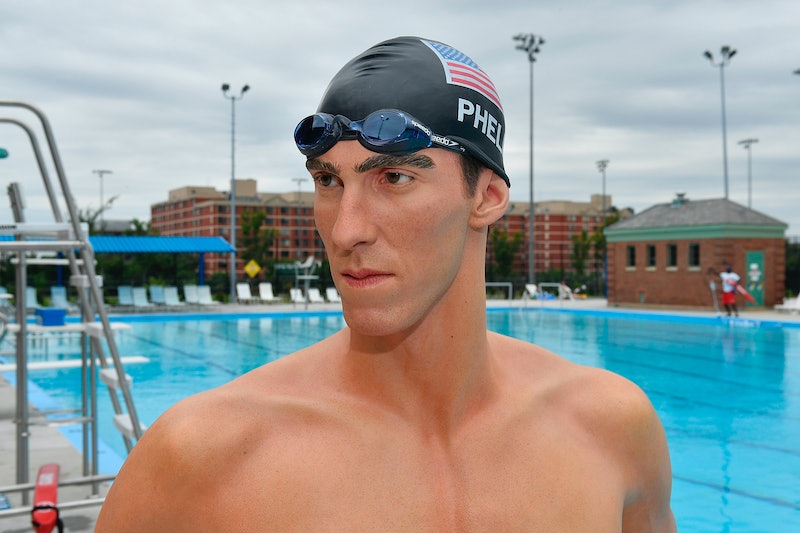 Arguably, the most high-profile athlete at the 2016 Olympics in Rio is Michael Phelps. The American swimmer has more Olympic medals than anybody else in history, and holds many, many other world records as well. But since he stepped into the pool at the 2016 games, many viewers have been wondering: Just what the heck are those spots on Phelps' back?

Phelps appeared with circular red spots on his shoulder and back. They looked a little bit like bruises, but they weren't. In fact, those marks are the result of a practice known as "cupping therapy," which is popular amongst competitive athletes and, according to WebMD, dates back to ancient times. Athletes use the technique to alleviate general wear-and-tear and promote blood flow.

Here's how it works: A cup is placed on the part of the body that's feeling sore, and through one of two methods, suction is created in the cup. The suction pulls the skin upward and promotes blood flow to that part of the body — and in its wake, it leaves behind a circular red splotch.

There are different ways to create the suction. The first, which Phelps used, is to place a flammable substance inside a cup, light it on fire, blow the fire out, and then put the cup on the skin. As the inside of the glass cools, that naturally creates a suction inside the cup. The second method is to simply attach a pump to the cup and, well, pump it. Cups with pre-attached pumps are cheap — a full set goes for around $15 on Amazon.

Phelps isn't the only Olympian to use the cupping approach to muscle soreness. Gymnast Alex Naddour, also of the American team, is a vocal cupping proponent, calling it "better than any money I've spent on anything else" to treat his physical ailments. And it's not reserved for athletes; cupping has become something of a trend amongst Hollywood celebrities as well, with Gwyneth Paltrow, Jennifer Aniston, and Victoria Beckham and others praising the cup and its healing properties.

Around a year ago, Phelps posted a picture on Instagram of himself whilst cupping. It's a fairly bizarre-looking practice, but on the other hand, hey, whatever works. Clearly, the technique certainly isn't hurting Phelps' abilities, considering he just took home yet another gold medal.