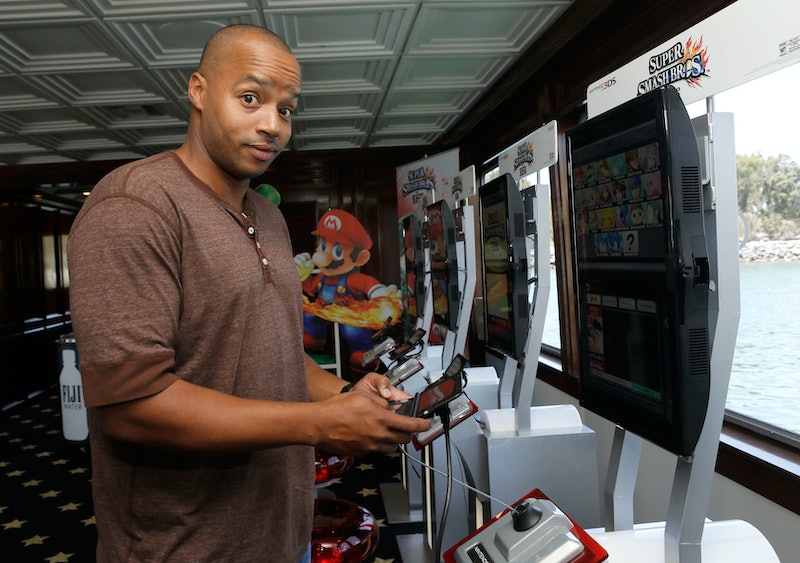 You may know Donald Faison as one half of J.D. and Turk's infamous "guy love," but to me, this guy will always be Dionne's on-again, off-again boyfriend Murray from everyone's fave '90s flick Clueless. The actor may have a hit sitcom under his belt with Scrubs, but you don't just forget the fact that you were in an iconic film like Clueless just because you've moved on to TV land. Fortunately, Faison is always willing to give the 1995 movie a shout out, as he proved in his latest hilarious Twitter picture. Faison totally channeled his Clueless character in this new Twitter pic, and it's everything Clueless fans could hope for.

It looks like Faison may be quoting Clueless just as much as I am in my everyday life. (You'd be surprised how often "That was way harsh, Tai," can come up in conversation.) Here, the actor references one of Murray's biggest scenes of the movie: the moment in which Murray decides to shave his head at a party. Here's how it all goes down: Murray escapes to the bathroom with his shaved-headed friend Lawrence. (In the TV series of the same name, Lawrence is re-named Sean and plays Murray's BFF.) Lawrence shaves Murray's head, and is quickly met with the explosive anger of Dionne. Hey, Dionne, don't you know? He's just keeping it real.

Murray shaved his head back in 1995, and now, in 2016, Faison is picking up a razor to do the very same thing. Check out Faison about to go in on his head with a razor:

It took fans no time at all to pull a Dionne on Faison:

It's good to know that Faison has as much love for Clueless as the fans still clearly do.