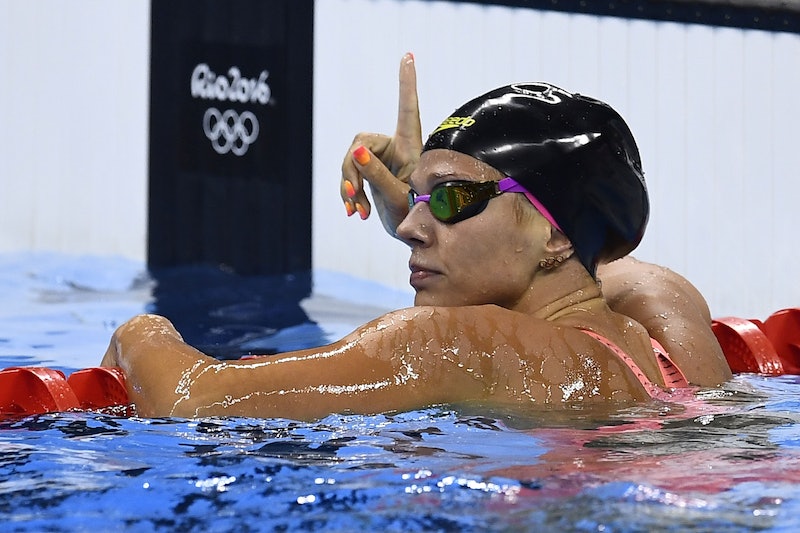 Normally, there's a sense of cheer when nationally-prized athletes compete in something as grand as the Olympics. But on Sunday, 24-year-old Russian world champion Yulia Efimova was booed, even though her doping ban was overturned. As she swam in the 100-meter breaststroke semifinal, the crowd revealed it hadn't forgotten about her testing positive just yet. Still, the Russian swimmer placed first in her heat. The crowd's reaction didn't necessarily come as a surprise, considering Efimova has battled her way through not one, but two doping scandals in the past few years. Most recently, she tested positive for the drug melodonium, which was confirmed by a source in the Russian swimming federation in March.

The drug is believed to pump blood flow in patients with ischemia but can also increase a person's exercise capacity. Prior to this doping scandal, Efimova tested positive for the anabolic steroid DHEA in 2013 and was effectively banned from competing between October 2013 and February 2015. Seeing as this wasn't her first offense, it was predicted that Efimova could face a lifetime ban. But in July, on the cusp of the Rio Olympics, she was quietly cleared to compete.

Efimova was not the only Russian swimmer to be banned by the International Swimming Federation last month. She, along with seven others, either tested positive or failed doping tests conducted by the World Anti-Doping Agency when they interrogated state-sponsored doping in Russia last year. Another report, released in July of this year, confirmed that Russia state-sponsored doping throughout the 2014 Sochi Olympics under the knowledge and encouragement of Russian officials. All of this, obviously, led many to believe that Russia might be the first country to be formally banned from competing in this year's Olympics.

Though the tests have affected Efimova's reputation, she successfully overturned the doping ban. As reported by Reuters, she appealed by arguing that athletes who have served previous doping bans should not be excluded again. The swimming governing body FINA announced Efimova's participation in not just the 100-meter breaststroke, but she's also on the list for the 200-meter breaststroke and 4x100 relay.

After Efimova's win on Sunday, NBC spoke with American competitor Lilly King who wasn't pleased to see Efimova place first with a time of just under 1:06. King told reporter Michele Tafoya, "You're shaking your finger 'number one', and you've been caught for drug cheating— I'm just not a fan," referring to Efimova holding up her finger after her winning swim. And as rivalries go, King beat out Efimova by .02 seconds in the semifinal and wagged her finger in the air right after.

Other competitors have expressed their displeasure too — Irish swimmer Fiona Doyle called Efimova a "cheater," and the Irish Mirror also reported that Doyle said, "It's like FINA keep going back on their word and the IOC keep going back on their word." Clearly, this doping scandal isn't going to dissipate anytime soon, especially after King's finger wagging nearly broke the Internet, marking what might become one of the Olympics' favorite rivalries.