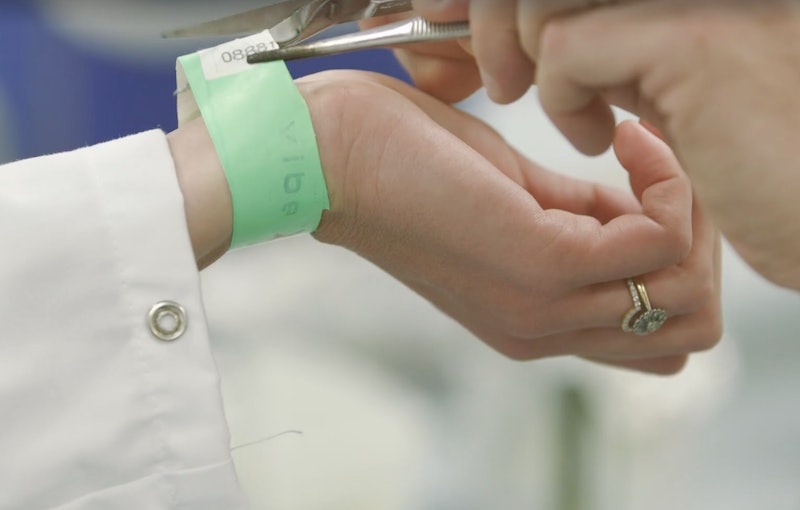 Festival wristbands may have many fond memories attached, but no matter how good that Kanye performance was — please, for the love of Yeezus, don’t keep them on after the fest is over. We don’t often think about the hidden bacteria in festival wristbands, but a new video produced by the hosts of the Australian radio station “Triple J” will make you see these grotty pieces of concert memorabilia in a whole new light. Hosts Veronica and Lewis took one listener’s fabric wristbands dating from festivals in 2016, 2010, and 2009 to a microbiologist to be evaluated, and what they found will have you reaching for the scissors.

Dr. Nick Coleman, a senior lecturer at the University of Sydney, explains that the worst case scenario for the concert bands would be finding that they are loaded with a bacteria "dangerous to human health." You definitely do not want some hotbed of germs hanging around your arm, touching your skin— yuck! Coleman goes on to explain that depending on the personal hygiene of the wearer, they may even find E.Coli!

After depositing the wristbands in designated test tubes, the bands are run through a process to extricating the secret bacteria. When put through a centrifuge, a milky liquid emerges, which is distilled and dropped onto agar plates. These are placed in an incubator and left to their own disgusting devices.

After cooking for four days, the bacteria has "flowered" and what emerges on the petri dishes is a full-blown bacterial battleground. The majority of the bacteria is comprised of micrococcus, a common bacteria that can be found on human skin, animals, dairy (yum cheese!), and even beer. It's not particularly harmful — phew!

There was also bacteria from soil compounds apparent, as the wristbands collect germs from the environment. A few small golden-orange spots were the most troubling sight.

Coleman suggests that these could possibly be Golden Staph (which can cause serious infections and boils). Never has there been such a good reason to cut off that old wristband. Perhaps most interesting is that in one plate there was a spot of bacteria used to make antibiotics that was killing other nearby bacteria; so perhaps everything balances out?

"We can’t say for sure that these are dangerous bacteria," Dr Coleman explains. "But the numbers are so high that I would advise people against wearing them [festival bands] for years, and years and years." His suggestion to those who see their bands as a status symbol or don't want to toss out their precious musical memories: put it somewhere safe — but not on your body.

"Cut it off and put it in a little scrapbook or something," Coleman suggests. "You don’t need to keep wearing it to have the memories."

Remember those wish bracelets you wore around your wrist for basically all of middle school? They were probably pretty disgusting too.