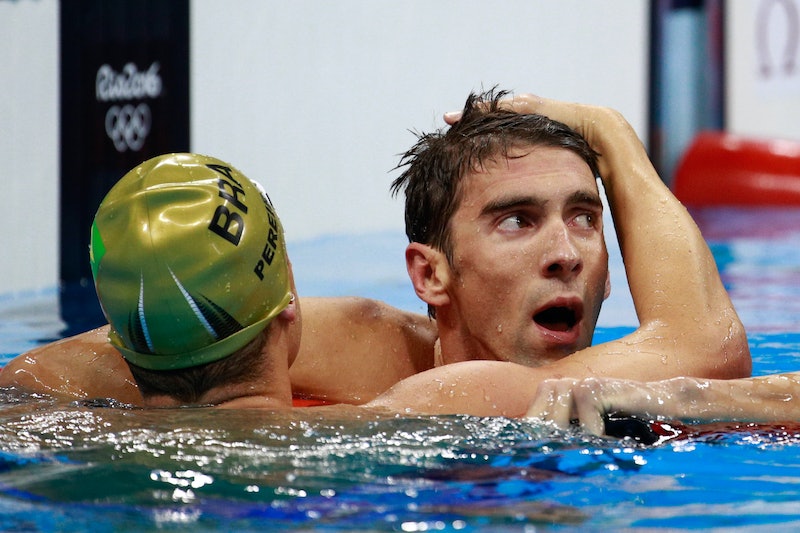 Unless you're a Kardashian and able to turn on your selfie face the second a camera steps into the room, you likely have a photo of yourself where you look completely and utterly ridiculous. Apparently, even Olympians have these pics — but unlike us "normals," their photos go viral. That's exactly what happened to the planet's best swimmer Michael Phelps, whose "game face" became the Olympic meme to end all Olympic memes. Here's what went down: Prior to Phelps' 200-meter semi-final on Monday, the athlete decided to show off his super intense pre-race face. Fans immediately lost their minds over it, and Time reported that one very committed fan even got the Olympian's face tatted on his body. NBC hasn't quite taken things to tattoo level, but they did decide to get into the meme game this week during the Olympics. By any chance, have you noticed Phelps' countdown clock that airs when he's on screen? Because well... it features one very mad swimmer.

Now, there are a lot of arguments as to just who Phelps in game mode looks like, but I'm thinking it's a cross between Grumpy Cat and Mr. Potato Head. No matter who or what Phelps looks like, he's clearly concentrating super hard on his next race ahead — which is why it's the perfect image to accompany the Phelps' countdown clock, which times the next moment he'll be in the pool competing.

You have to appreciate that NBC isn't letting this joke slide. I mean, yeah, Phelps is a national treasure and everything, but come on: How could you not get in on this meme action? Here are just a few other examples that prove this joke is way too funny to let die:

There's likely one person who is likely thrilled about #PhelpsFace, and that's gymnast McKayla Maroney, who is more than happy to give up her gold medal in Olympic face to Phelps.

Here's hoping the next Olympics gives us an equally meme-worthy face.