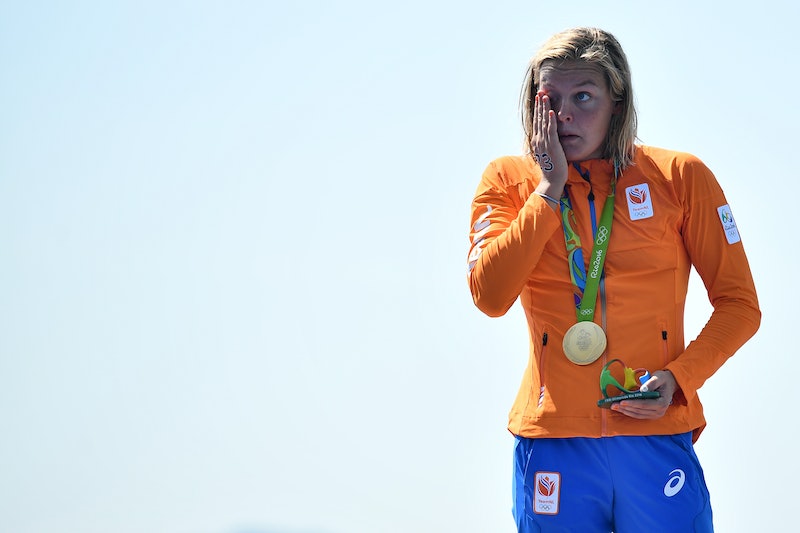 Gone are the days of Olympians receiving a bouquet of flowers along with their medal — instead, they're given a decorative... napkin holder? Well, not exactly, but it seems like everyone is confused by those statues Olympians are given at their medal ceremony, and guesses as to what they are have ranged from paperweights to napkin holders. In actuality, the statues serve a particular purpose that only the newly minted Olympians can appreciate.

So just what are those weird little statues? It turns out that they are actually medal holders (all in all, a pretty convenient gift for someone like swimmer Michael Phelps, who has a lot of medals to hold). The 3-D printed figurines, reportedly the first of its kind in Olympic history, are the brain child of renowned designer Fred Gelli and based around a sculpture design of the 2016 Rio logo.

The looping design is meant to mimic the outline of Rio's iconic Sugarloaf Mountain, with the color scheme pulling from the green, yellow, and blue found in Brazil's flag. According to the design website Tatil, the figurine itself is meant to reflect "contagious energy, harmonious diversity, and exuberant nature."

But aside from holding medals, the statues serve another purpose — they are meant to reflect the Rio Olympics' message of sustainability. Rio 2016 executive Christy Nicolay told The New York Times that the flowers traditionally given to the athletes during their medal ceremonies were "not very sustainable," and were often thrown away immediately after Olympians collected their prize. And so they sought out an alternative, eventually landing on this new, 3-D printed design. Flowers, however, have still found their way into the 2016 Olympics, and instead line the podiums during the ceremonies.

The brand director of Rio's organizing committee, Beth Lula, reiterated that the statues were meant to be keepsakes. "It's something for the athletes to remember Brazil. Michael Phelps can show them to his grandchildren."

But for all the talk of sustainability, there has been some discrepancy regarding the holder's materials. The official Rio 2016 website claims that the sculpture is created from wood, though The New York Times cited the materials as resin, polyresin, and PVC, a less sustainable method of construction.

Regardless of the materials, at least we now know the mystery behind the unusual statues. It looks like the Olympians will have to find something else to hold their napkins for them.