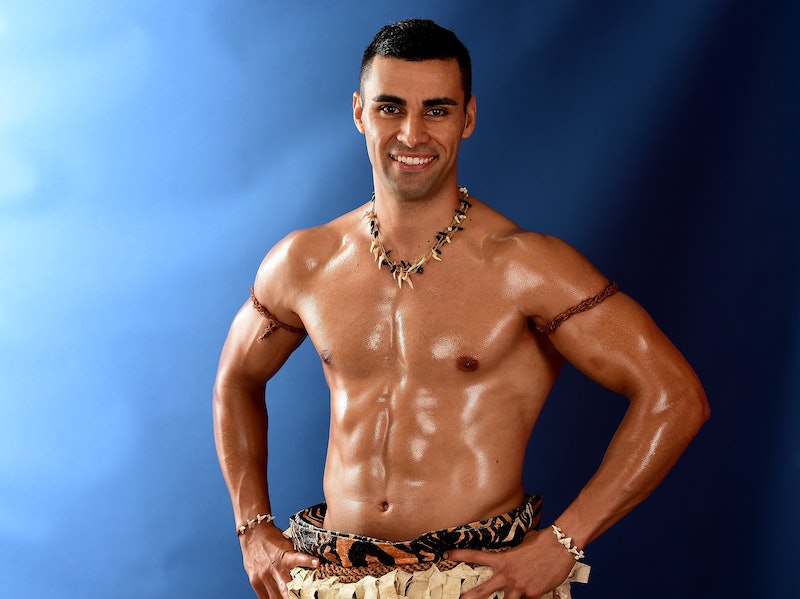 It's hard to keep track of all of your favorite athletes during the Olympic games, especially those that you fell in love with unexpectedly. Luckily, Sunday's celebration gives us a chance to check back in with the competitors before they all say goodbye. Is the Tonga flagbearer at the Rio Closing Ceremonies? Pita Taufatofua didn't miss the chance to steal the spotlight a second time.

The taekwondo athlete, who lives in Australia but is representing the Polynesian kingdom of Tonga in in the 2016 Olympic games, shot to viral stardom (and caused everyone in the bar with me to emit an audible "WHOA") the second he emerged onto the arena in Rio during the Opening Ceremony shirtless and very oiled up. I know that Zac Efron is all about Simone Biles and the Final Five these days, but I think he would have been proud of Pita Taufatofua's ab display. The Tongan has since appeared on many an NBC program, including the Today Show and Entertainment Tonight.

Not every athlete sticks around for the Closing Ceremony. Some opt to leave the country early and get back home when their events are over, for various reasons. However, his last taekwondo event was Saturday, so it makes sense Taufatofua stuck around. The procession of athletes is also a little bit different. Flag bearers come all together, followed by the athletes. They don't always wear the same thing that they wore to the Opening Ceremony, but I have a feeling Taufatofua will be easy to spot. It might be hard to top that iconic entrance, after all.

The athlete was indeed at the ceremony and had "something special" planned, despite losing his event. I don't think he seems all that bothered.

This time, his skirt was a little less traditional, and featured the design of the Tongan flag. Sports aside, this was clearly a memorable experience for him — and all of us as well!