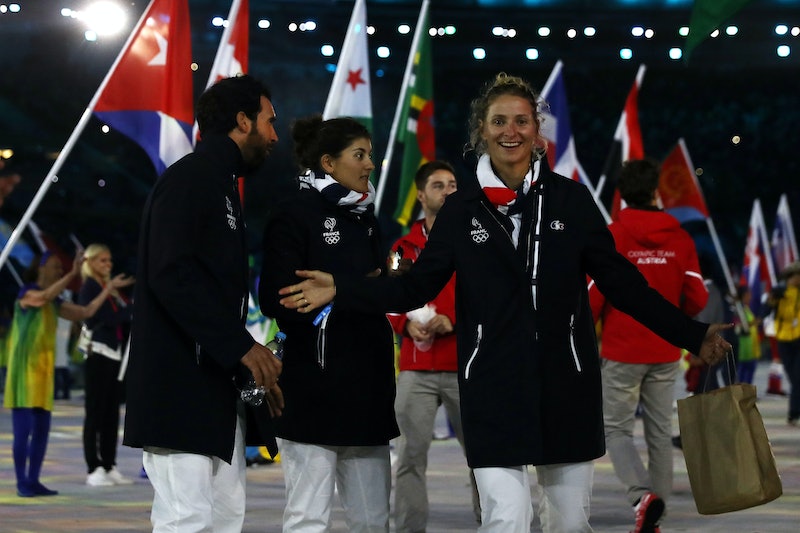 Y’all, I don’t know what the French athletes were sipping at the Olympic closing ceremony, but I know that I want some of it! The Olympics have ended, but they didn’t seem sad at all — in fact, the French team was dancing its collective French behind off. It’s nice to see that even when you have to walk in a circle for four hours that you can have a little fun with it.

Oh, I kid — there’s obviously a lot more to the closing ceremony than that, and France did have reason to celebrate. The country nabbed 10 gold medals in sports like boxing, judo, equestrian events, and sailing; 18 silver medals in boxing, equestrian events, judo, sailing, and more; and 14 bronze medals in sports like track and field, handball, swimming, and shooting. That’s certainly not a bad showing for France, and I’m glad that the Olympians are celebrating their hard-earned medals with a giant dance party. I mean, you’re in Rio, there’s samba playing, you’re young and in the peak of your physical prowess, you’re with your good friends, and you’re alive, baby! The French Olympic team seemed like they were soaking up every moment of the closing ceremony, and I hope their enthusiasm was infectious to the rest of the countries.

After a long, hard, and competitive two weeks, it’s nice to see the teams let loose a little bit. As an Olympian, you focus and you train and you diet and you lift and you do all of these things just to get a hundredth of a second faster and win, and Olympians definitely deserve some time off after the games. They need a drink and a hot fudge sundae and to sleep in past six in the morning. Cheers to the French Olympic team, because they certainly look like they know how to have fun.