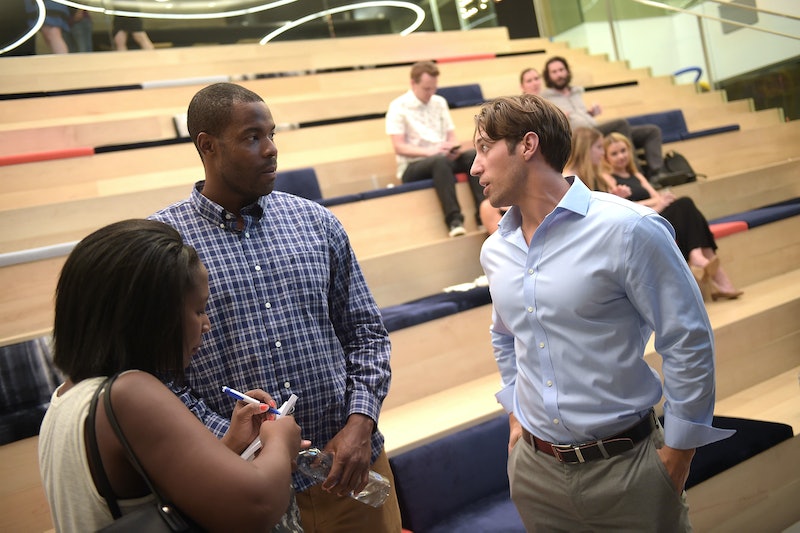 MTV's newest docuseries explores the cases of three convicted criminals who claim they're innocent. Unlocking The Truth host Ryan Ferguson was wrongfully imprisoned for 10 years before his own exoneration, according to ABC News, so he knows his subject well. Ferguson and co-host Eva Nagao, director of the Exoneration Project, are hitting the road with MTV to do their own digging. One of the inmates appearing on the show is Kalvin Michael Smith, currently doing time for assault and robbery, though he claims he's innocent. Before his conviction, though, another man's name was connected to the case. Who is Kenneth Lamoureux?

According to the Winston-Salem Journal, Kenneth Lamoureux allegedly visited the Silk Plant Forest store in a Winston-Salem shopping center on a fateful day in 1995. That day, a violent assault on the store premises changed the lives of both Kalvin Michael Smith and pregnant victim, Jill Marker, forever. The paper reported that Marker was beaten so severely by her attacker that she is now blind and requires 24-hour-care due to her brain injuries, so she has largely been unable to participate in the conversation about the details of that night. Smith was later convicted of the assault.

The Winston-Salem Journal reported that a police officer named Arnita Miles wrote in her initial incident report that Marker was allegedly unable to identify her attacker. Twelve years later, an affidavit signed by Miles surfaced that claimed Marker allegedly identified her attacker as a black man. In 2013, a FOX 8 article reported that Miles had disavowed the affidavit and went back to what was written in her original report: Marker could allegedly not identify her assailant.

As reported by The News and Observer, the affidavit is significant because it "was the first and only document to allege that the victim, in the first minutes after the attack, identified her assailant as a black man." The paper reported that initially, authorities spent several months following the attack pursuing white suspects. One such suspect was Lamoureux.

Lamoureux was investigated in conjunction with Marker's assault because of his history of domestic violence. According to a City of Winston-Salem administrative review of the case, Lamoureux's then-estranged wife Ellen claimed that her husband had physically abused her repeatedly in the course of their relationship. The same review reported that, when Lamoureux took a polygraph test, he showed a "degree of deception" when asked, “Did you strike, push or assault a woman inside the Silk Plant Forest?” The review stated that Lamoureux later "qualified his response to the question by stating he was thinking of an incident when he assaulted his wife in November 1995." According to the same administrative review, Ellen sought a court order in 1995 to protect herself and their two children, and her request was granted.

Marker's friend Jeana Schopfer claimed in an affidavit filed in 2010 that Marker had allegedly called her in distress after Lamoureux allegedly came into the store while she was working, according to the Winston-Salem Journal. That call was allegedly made only minutes before the attack. Schopfer claimed that Marker told her that Lamoureux allegedly had asked Marker on a date and allegedly became aggressive and angry when she said no. The aforementioned review of the case reported that "Lamoureux denied any involvement in the crime and disputed the witnesses’ identification of him."

Ultimately, the police focused their case entirely on Smith and Lamoureux was never charged with any crime in connection to Marker. The Journal reported that Lamoureux later moved to Charlotte and ultimately to Texas where he died at age 61 in 2011.

Last Friday, only two days after the Unlocking The Truth premiere aired, the North Carolina Supreme Court dismissed Smith's appeal, according to the Winston-Salem Journal, and Smith's conviction still stands.