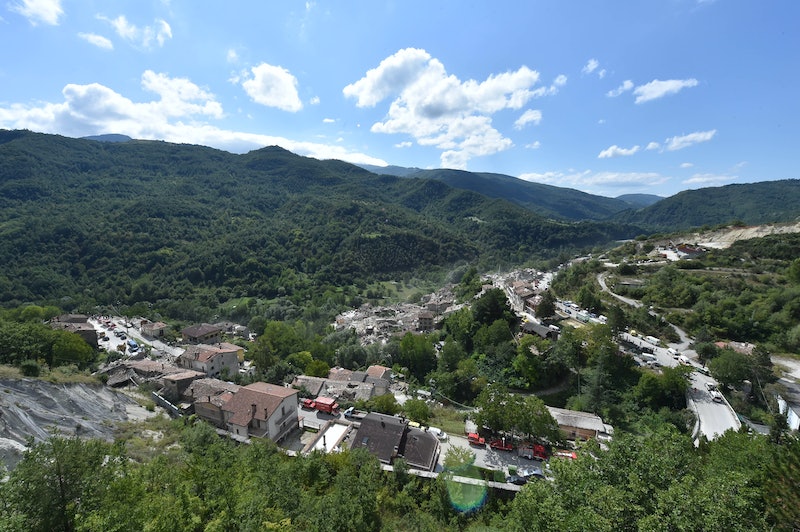 Early Wednesday morning, a 6.2-magnitude earthquake struck the center of Italy, leaving dozens dead and more trapped in the rubble. CNN reports that rescue teams and everyday citizens worked in the darkness to try to rescue citizens trapped in the aftermath, and the death toll is expected to rise significantly, given that scores of others remain missing. If you're looking for ways to show support, you can donate to the Italian Red Cross, and show your support online with tributes to the victims of the Italy earthquake.

Throughout Wednesday, as news of the devastating earthquake — one that could be felt as far as Rome, The New York Times reported — spread throughout Italy and to other countries, individuals took to social media to share their support for the victims. Facebook activated its Safety Check feature, allowing those in Italy to mark themselves as "safe" for the sake of their families and friends. The town of Amatrice, which contained historical artifacts dating back to the 13th century, was almost completely reduced to rubble, reported The Irish Times. The epicenter of the earthquake was close to Amatrice and the commune of Accumoli, where many residents were killed in the earthquake.

Here are some of the tributes and memes to victims of the Italy earthquake that have been shared on social media.

The death toll is expected to rise considerably throughout Wednesday.

More like this
Twitter Was Saying The Same Thing About Sam Ryder’s Surprising Eurovision Result
By El Hunt
How To Fight For Reproductive Rights, Based On How Much Time You Have
By Courtney Young
The Music Industry Continues To Fail Black Women
By Precious Adesina
Sarah Everard’s Killer Wayne Couzens Is Appealing His Whole-Life Sentence
By Sophie McEvoy
Get Even More From Bustle — Sign Up For The Newsletter