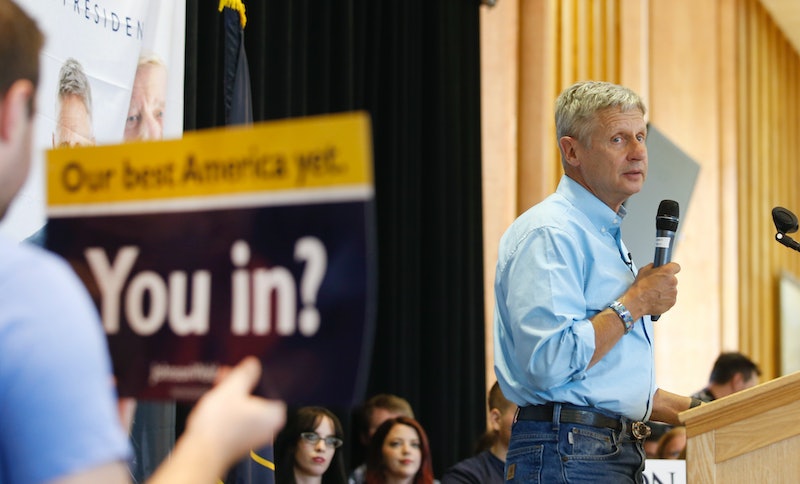 Libertarian Party presidential nominee Gary Johnson is shaking up major party ideological lines with his socially liberal, fiscally conservative beliefs. This blend makes him simultaneously appealing to people not represented by major party ideologies and susceptible to criticism from those firmly rooted on the right or left on a broad range of issues. On Tuesday, Johnson appeared on FOX's The Five, and was lambasted by a conservative panel concerning his positions on several social issues, including the Black Lives Matter movement. Johnson firmly defended Black Lives Matter, giving well-informed responses to one host's conservative talking points.

On The Five, Johnson repeated an admission he made at a CNN town hall earlier in August — that he's had his "head in the sand" on the issue of institutionalized racism in the criminal justice system until recently. One panel member, Eric Bolling, expressed shock that he had heard Johnson speak in support of BLM and against the phrase "all lives matter," to which Johnson responded, "All lives do matter, but when it comes to whites, guess what? We’re not being shot at the rate of six times blacks are being shot at," indicating that all lives are not treated as though they matter equally.

According to a recent Denver Post analysis, black people are 2.5 times more likely to be shot by police than white people. Johnson might have been referring to a statistic found within Heather Mac Donald's War on Cops, which claims that black males between the ages of 14 and 17 are six times more likely to be killed, reportedly due to a higher rate of homicides committed by black teens.

Johnson also pointed out that black people are sentenced to prison terms at a disproportionate rate. "When it comes to the 'War on Drugs,' if you are of color, there's a four times more likelihood that you'll end up behind bars..." Here, Johnson is likely referring to an American Civil Liberties Union (ACLU) analysis which found that black people were 3.73 times more likely to be arrested for marijuana.

Johnson responded by tying the issue back to the "War on Drugs," reiterating that black people are unfairly targeted and incarcerated at a higher rate than whites. An ACLU report found that black and white people use marijuana at roughly the same rate, which suggests racial bias in arrest rates for marijuana.

Johnson might not have convinced Bolling of the validity of BLM and the insidiousness of the "all lives matter" response. But he stood his ground and defended BLM nonetheless, highlighting racial disparities in shooting rates and sentencing.