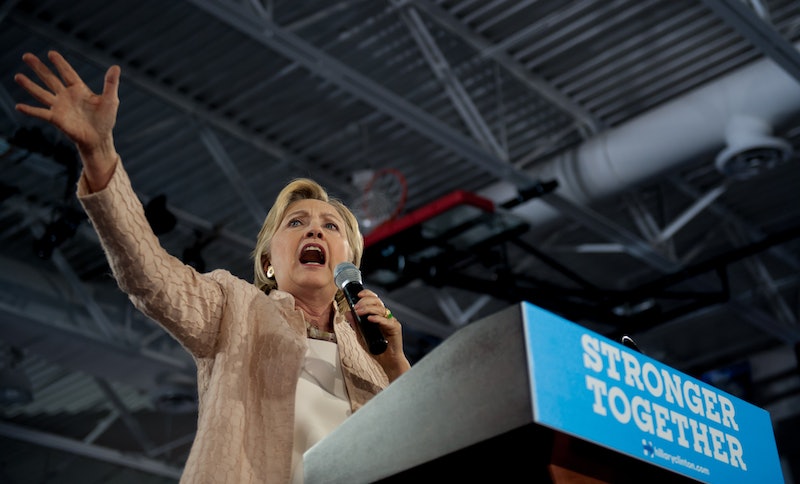 The alt-right movement, whose supporters identify with a radical notion of conservatism that can be chalked up to white nationalism, has gained an unprecedented amount of traction over the course of the last year. In fact, Republican presidential nominee Donald Trump's campaign has really succeeded at garnering support from the movement by speaking to its white supremacist ideologies. With the 2016 presidential election now moving into an increasingly important time, Democratic nominee Hillary Clinton is playing the alt-right card, as she gave a speech in Reno, Nevada on Thursday, Aug. 25 in which she linked Trump's campaign to the rise of the white nationalist movement.

As Media Matters for America explained, today's alt-right movement is essentially a "rebranding of classic white nationalism for the 21st century," noting that Trump is kind of their perfect candidate. As his rhetoric since announcing his campaign has opposed immigrants, Muslims, the black community, the Latino community, and women, Trump perfectly fits the alt-right narrative — that embracing any minority population would be a form of "white genocide." Even if Trump has not openly identified with the movement (though Trump campaign CEO Stephen Bannon has), the movement has chosen Trump.

Clinton wanted to make that clear on Thursday, but consider the coincidental timing of her speech.

The Los Angeles Times noted that the timing of her speech on Trump and the alt-right love affair perfectly suits her latest email scandal. The most recently released emails detail how during her time as secretary of state, Clinton met with Clinton Foundation donors, prompting many to question whether and how these meetings may have impacted her handling of her role. And what's worse, as The Los Angeles Times added, is not only that the contents of her emails are problematic, but also that she and the State Department tried to hide them.

So maybe the Clinton campaign addressing Trump as the candidate for the alt-right had particular motives. However, she is definitely not wrong to make the connection. Regarding her Thursday speech, the Clinton campaign noted, "This 'alt-right' brand is embracing extremism and presenting a divisive and dystopian view of America which should concern all Americans, regardless of party."

Cathy Young wrote for The Federalist that the alt-right is "a mix of old bigotries and new identity and victimhood politics adapted for the straight white male." That's exactly where the question of white victimhood and white genocide come into the rhetoric of those who are backing Trump. And Young couldn't be more right about the movement, which has frequently targeted left-leaning individuals online, whom they often deem "social justice warriors" while mocking the entire notion of being "triggered" by something.

Think back even to when Breitbart's technology editor, Milo Yiannopoulos, was banned from Twitter for spreading harmful messages. Offensive speech is technically still free speech until it becomes harmful to a person's health, well-being, and life.

However, let's all take this with a grain of salt. Clinton might be right about the importance of this connection, but she also could be using it as a political maneuver to cover up a less-than-ideal political week.