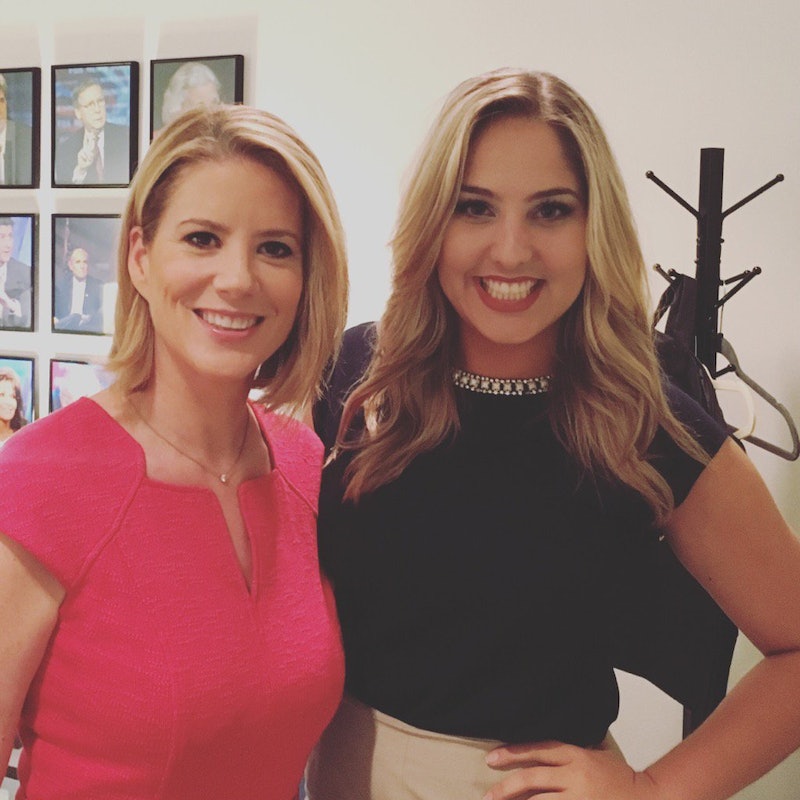 My name is Kristen Powers. It's similar to the name Kirsten Powers — aka the famous USA Today columnist, CNN political analyst, and former Fox News Correspondent. For this reason, I've experienced firsthand the online harassment directed toward women in the media. Apparently, some viewers think it's acceptable to tell Kirsten to put a bullet through her head — which they unknowingly direct to me, Kristen Powers, on Twitter and Facebook.

When my social media blows up with notifications, it's because of one of two things: My best friends paying tribute to my golden high school days by liking every old status and photo, or a surplus of hate mail that I receive on behalf of Kirsten. It's usually the latter.

And these tweets don't hold back. For example, here's one I received after Kirsten appeared on Fox: "i don't love your politics, but you're the sexiest woman at Fox News. Would love to f*ck the liberal out of u!"

Sure, I've gained a few confused Twitter followers, but at what cost? 140 characters can do a lot of damage. These are not "just" mean tweets or messages — they're harassment. I've been living in the shadow of someone else's haters for over two years now, and these messages have made me realize the greater extent of sexual harassment. So much so that when I was in Washington, D.C. in early August, I decided to try to meet up with Kirsten once and for all.

My receiving these misplaced messages has been a running joke amongst my friends and family throughout undergrad and graduate school. I've tried to laugh off the nonsense people send, but at the end of the day, it's not a joke. For many women, it's a dark reality that comes with their job — a job I am about to enter into. And Kirsten is no stranger to this. Whenever she appears on national TV, the offensive messages almost instantly fill my Twitter and Facebook:

"Your comments make me sad because you are a disgrace to young woman and woman who have children."

"You should be ashamed of the s*** coming out of your mouth."

"sorry...Bill O took you to the wood shed...you are a sad, sad person"

"@KristenPowers__ this is pitiful. You write about yourself? Seriously, you are a loser!"

One thing that has always stuck out to me about the messages I receive on behalf of Kirsten is that the criticism is often, if not always, gendered. People (usually men) deem Kirsten a "little female," try to silence her, and focus heavily on her physical appearance.

Why not comment on her merit? Or the points she brought up during her TV segment? These comments highlight the fact that, subtly or not so subtly, women are objectified in society and harassed on a daily basis. Here are some examples of what this gendered criticism looks like:

"You need to wake up little female."

"I love liberal women they are so easy. Go Trump."

"YOU ARE AN IDIOT. YOU NEED TO NOT SPEAK."

"@KristenPowers__ It's clear, that you should stop thinking."

"@KristenPowers__ her face is wrinkling like a wet paper bag in the sun."

"Bill at least if your going to have a dumb liberal cant you dig up a good looking one."

"Wow…they sure know how to pick em' don't they? Blonde, Dumb, and Liberal."

This is just a fraction of what I receive. They're not just "internet trolls" — they're destructive. I would be lying if I said I didn't feel disgusted after reading some of the comments. I'm human; even if these weren't meant for me, they still hurt just the same.

So when I was in Washington, D.C. in August, I tweeted Kirsten. The next thing I knew, we were grabbing dinner.

Kirsten tells me that she chooses to ignore the messages. She explains that, at the beginning of her career, friends lovingly told her she had to stop reading the Tweets because they were so unhealthy. Now the messages come in masses, and at this point, she says that they're white noise.

The following day, I went into the Fox studios and watched Kirsten discuss Trump's "Second Amendment people" comment on The O'Reilly Factor. And just like that, the messages came pouring in. But this time, we were in the same room.

Meeting Kirsten in person was a reminder that she's not just a Twitter handle; she's human. She's a person with emotions. Every day, Kirsten gets up and goes about her daily routine doing her job, just like the thousands of other women who encounter this same harassment. Women receive abusive, offensive, vulgar messages simply for doing their jobs. I wish I could say this is an abnormality, but it's not.

The more we talk about it, and the more conversations we start, the more this unhealthy harassment will become recognized. That's how we can start to create change. And I hope many do learn from this and acknowledge that online or IRL harassment is never OK. One thing I learned after Kirsten and I finally met in person: We are not alone, and together we are stronger than any Internet troll.