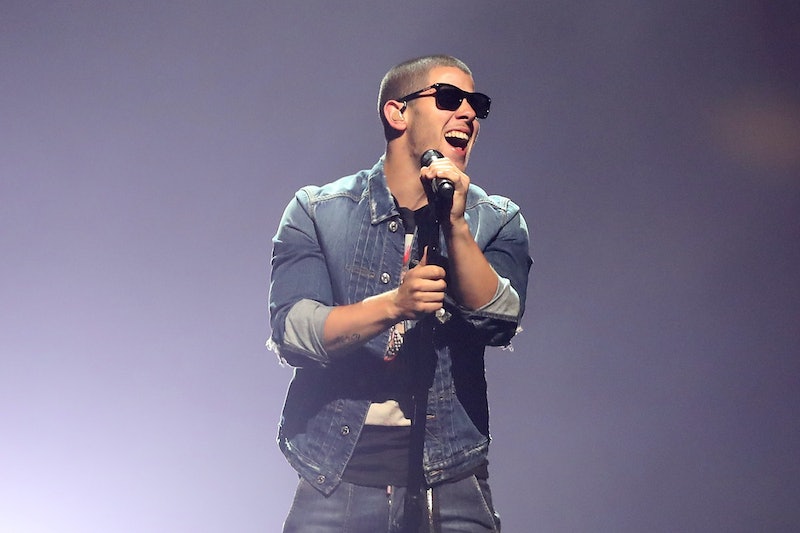 Despite voicing his disappointment that "Close" wasn't nominated for a MTV Video Music Award this year, Nick Jonas still delivered an energetic VMAs performance of "Bacon" alongside Ty Dolla $ign on Sunday night. IN A DINER, GUYS. IN A REAL DINER. (The Tick Tock Diner to be specific, which is conveniently located right near Madison Square Garden, where the VMAs were held). While this song title will forever crack me up (as will the line "aw sh*t, throw some bacon on it"), Jonas proved that he certainly knows how to command a stage during the number, getting the diner crowd even more hyped than they already were. I mean, seriously, who doesn't like to sing about bacon, especially with someone as beautiful as a Jonas Brother? Now, I also want brunch. Or late-night drunken munchies.

He later joined Ty Dolla $ign on a (real, non-diner) stage and borrowed just a tiny bit of Beyoncé flare for the line "I woke up like this." The song, off Jonas' most recent album, Last Year Was Complicated, is infused with just the right amount of sexiness and sweetness — kinda just like the breakfast meat itself. So, naturally it was a big hit at the VMAs.

Nick Jonas certainly threw some bacon on it — and I'm totally obsessed that the majority of the performance was in an actual diner. WERK.