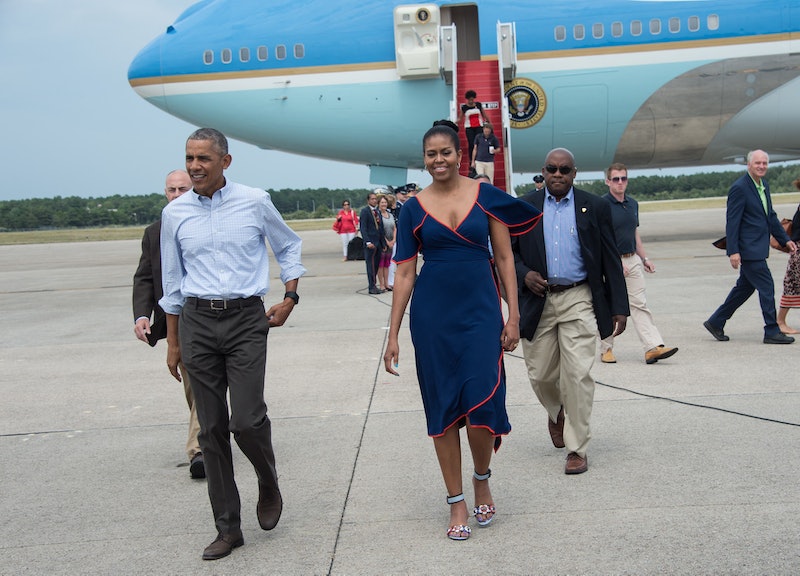 The cover for the October issue of Essence, which features President Barack Obama and First Lady Michelle Obama, has been going viral on the internet. In the days before the magazine actually hit news stands, people were singing the praises of the Essence POTUS and FLOTUS magazine cover online. The magazine's special issue will honor Obama and Michelle as they prepare to say goodbye to the White House. Not only does the cover feature the celebrated couple in an affectionate pose, but it also has other must-see photos within the issue.

Twitter users quickly shared their feelings on the cover of POTUS and FLOTUS, calling it "stunning" and "graceful," comments which fall in line with the headline for the feature story "Grace and Power." (Fun fact: This was also the title of a 2004 book about the JFK and Jackie Kennedy).

The Obamas, who have long been celebrated for their warm presence and wholesomeness as a couple on the national stage, received no shortage of acclaim as social media posts continued to praise the magazine feature story and accompanying photos that appear in the October Essence issue. These 11 tweets celebrate the First Couple's Essence cover in the best way:

The magazine will become available as the Obamas prepare to make way for the next presidency, and this issue may very likely become a collective piece for many Americans who will miss the Obamas after November.

More like this
BTS Announced An Indefinite Hiatus & The ARMY Is Freaking Out On Twitter
By Sam Ramsden
The Best Memes & Tweets About Beyonce's New 'Renaissance' Album
By Radhika Menon
'The Summer I Turned Pretty' Using “Cruel Summer” Has Twitter Begging Taylor Swift To Release A Music Video
By Radhika Menon
What Is A “Softboy?” The TikTok Term & Aesthetic, Explained
By Courtney Young
Get Even More From Bustle — Sign Up For The Newsletter