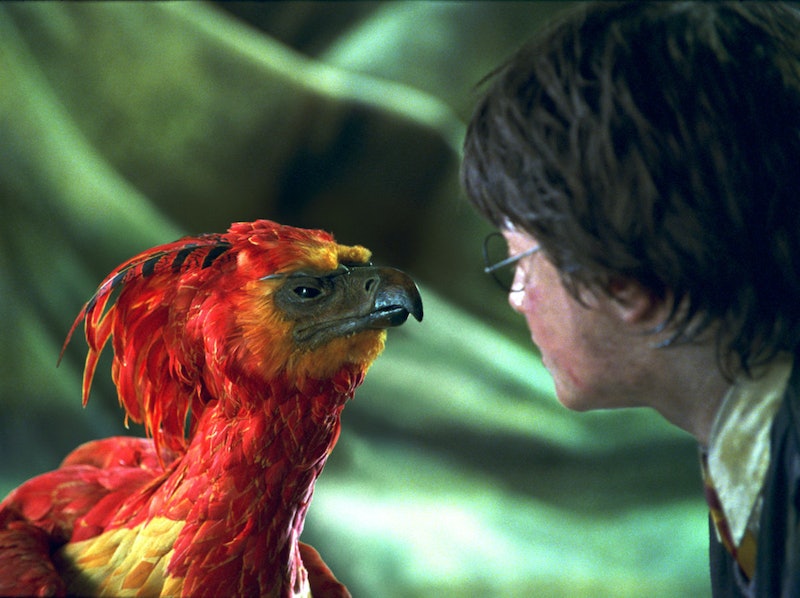 To be honest, guys, I'm not sure what's messing with my head more — J.K. Rowling's insane talent for weaving a complicated narrative, or her fans' equally insane talent for positing Harry Potter fan theories out of them. One of the latest is a theory that Harry Potter had a horcrux, which may sound ridiculous at first, but sounds decidedly less ridiculous when you read through Tumblr user marauder4evr's reasoning. According her post on the subject, Fawkes might have been Harry Potter's horcrux in the books.

Your first concern with this theory is probably totally legit. How could sweet summer child Harry James Potter commit an act unspeakable enough to make a horcrux? As marauders4evr points out by harking back to Harry's first encounter with Voldemort, we know it's entirely possible to make an "accidental horcrux". And as she reminds us, given that we know that Harry himself is an accidental horcrux, it is fair to say that his "soul" is already unstable. So when exactly would that happen?

And I think that after he does this, a little piece of his soul jumped ship, merging with Fawkes’ soul. After all, Fawkes had landed on his arm in order to cry Harry back to life.

Marauders4evr theorizes that, in the moment that Harry stabbed the basilisk up the wazoo, he performed an act dire enough to warrant his soul splitting. And BOOM, here comes Fawkes for the win — a convenient receptacle for any soul fragment to harbor itself on, especially considering Fawkes saved his damn life.

In fact, the theory gets a little darker from here. Remember how fans went nuts after looking into the wording of the prophecy? It said, "either must die at the hand of the other for neither can live while the other survives," indicating that in order for Voldemort to truly be gone forever, Harry Potter will become immortal — in other words, perpetually The Boy Who Lived. While that would make sense in regards to the prophecy, it doesn't actually explain how this is possible. Enter the back end of marauders4evr's theory:

“Okay so Fawkes is Harry’s horcrux. What does that mean?”

That means that if Harry were to say, walk into the Forbidden Forest to stare Voldemort straight in the eye and accept his fate…

He would come back.

Because really, it’s never explained how Harry comes back. There have been a few feeble guesses. This is mine.

The reason why Harry came back is because he couldn’t die because a piece of his soul was in Fawkes.

As long as Fawkes is alive, Harry cannot ever truly die.

“Wait a minute…Fawkes is always alive.”

And now you see the best part of the theory!

No matter how much Fawkes dies, he always comes back. Fascinating creatures, phoenixes.

Fawkes can never die. Which means, if you believe in this theory, that neither can Harry.

Which means that Harry can never die.

Which means that Harry Potter will always be The Boy Who Lived.

And really, what better way to symbolize his eternal life than a phoenix? It’s literally the representation of Harry - someone who ‘dies’ multiple times but always comes back. Harry and Fawkes. The Ones Who Lived.

CHILLS, you guys. CHILLLLLSSS. To read the whole of marauder4evr's fan theory, complete with sassy commentary re: horcruxes and baby Harry, check out her original post here.