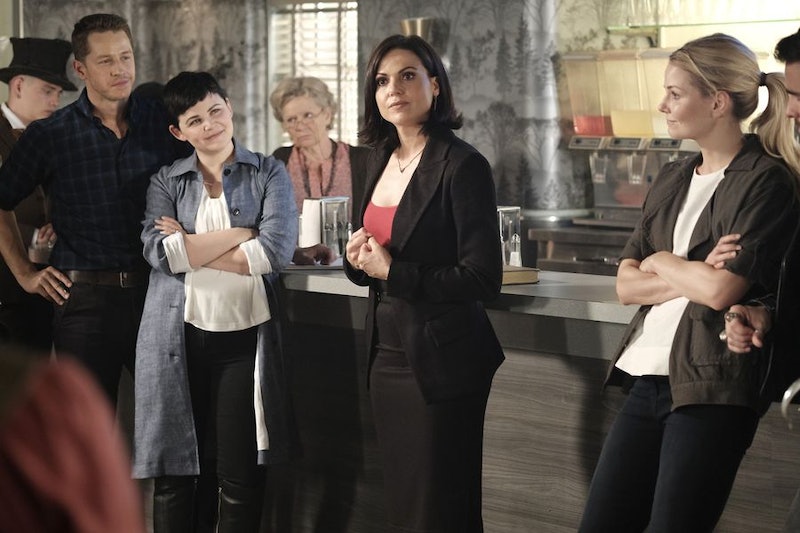 As hard as Regina may try, separating herself from her evil side doesn't seem to be going as well as she'd like for it to be. Granted, she only killed the Count of Monte Cristo because she was trying to save Snow and Charming, but it was definitely the inch the Evil Queen was looking forward to get inside Regina's head. And it may not be the only death she'll eventually be responsible for. We know that Emma will die on Once Upon a Time at the hand of a hooded figure whose face has not yet been revealed. But is it possible that Regina will be the one to kill Emma? The Savior certainly seems to think it's a possibility.

During one of her therapy sessions with Archie, Emma reveals her concerns about who she believes may be under that hood and the two people highest up on the suspect list of the Evil Queen and Regina herself. Obviously, Emma has grown very close to our favorite former villain and doesn't want to believe she could do such a thing. But her biggest concern is that during the glimpse into the future, Regina is the only person missing from the group running to save her. She sees Henry, Snow, Charming, and Hook all running toward her... but Regina is nowhere to be found. Why is that?

On the one hand, she could just be off dealing with something else at the time, unable to come to Emma's aid. Or, for the more cynical, it could mean that she isn't shown because she is the one that Emma is fighting. Suffice to say, this could put some serious strain on the #SwanQueen dynamic, but I hope it's something they're able to overcome. These two work best when they work together and if they stop trusting each other now, then Emma's chances of survival are more bleak than ever.