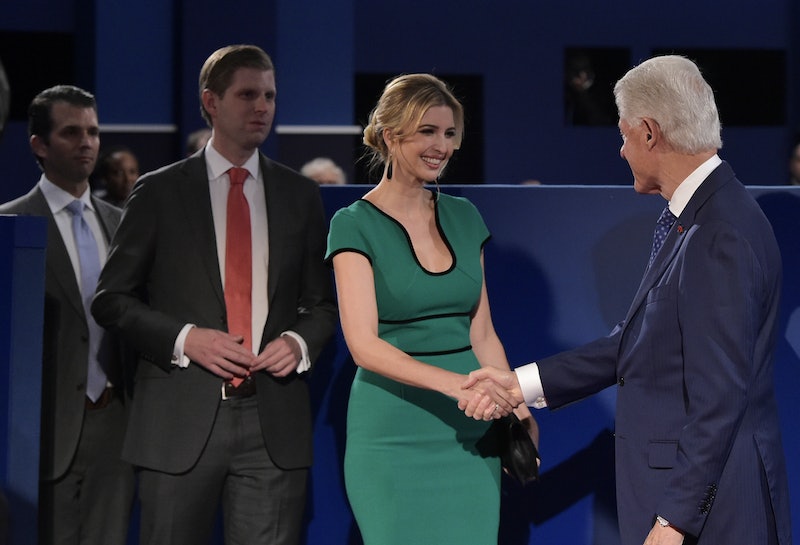 Well, the second presidential debate on Sunday night certainly was a doozy — but although Donald Trump and Hillary Clinton were both on the attack, their daughters were as warm towards each other as ever. Ivanka Trump and Chelsea Clinton at the second debate shared a lovely little moment at the conclusion of the whole thing, showing that even though Sunday night was quite possibly one of the ugliest debates of all time — if not the ugliest debate of all time — they’re not going to let it harm their relationship. And in an increasingly bananas world, I find that rather comforting. (What can I say? I will take my comfort where I find it, even if that means one five-second moment from an hour and a half of... whatever the heck all that just was.)

Public interest about Chelsea and Ivanka’s friendship was first piqued by an August interview with Ivanka in Harper’s Bazaar. According to the piece, reports had said the two had “suspended” their friendship due to their respective parents’ campaigns; however, Ivanka countered the claims, saying, “I still consider her a very close friend, and she considers me as well. We have a great relationship.” She followed this statement up with an excellent point: “I’m not running for public office, and neither is she, so of course we’re still friends.”

In response, Chelsea confirmed Ivanka’s words during during an appearance on The View in September. “We were friends long before this election [and] we will be friends long after this election,” she said. “Our friendship didn’t start in politics, and it certainly is not going to end because of politics. I have tremendous respect for Ivanka.”

And then, after Sunday's debate wrapped up, we got this little moment:

And you know what? I kind of love it. This election cycle has been many things, but I would argue that “civilized” is not one of them. And honestly, it’s kind of disturbing to me that we’ve gotten to a point where the decision of who is going to run our country has so frequently come down not to facts or policies, but to who can land the right proverbial blows. I think it’s worth remembering that you can disagree with someone and still be cordial, respectful, and even friendly towards each other.

I can’t imagine how tough it must be for both of these women right now; as Ivanka pointed out, neither she nor Chelsea are running for office, but because they’re closely related to the people who are, they’re part of the election cycle whether they want to be or not. But what I find so remarkable about them is the way they’ve been able to keep it all in perspective. Chelsea and Ivanka may support their parents, but they are not their parents — and the fact that they’re able to set aside their parents’ stakes in the election and maintain a friendship independent of it all is encouraging.

Not agreeing with someone doesn’t automatically make them your enemy. Chelsea and Ivanka seem to know this — and it would be good for the rest of us to remember it, too.