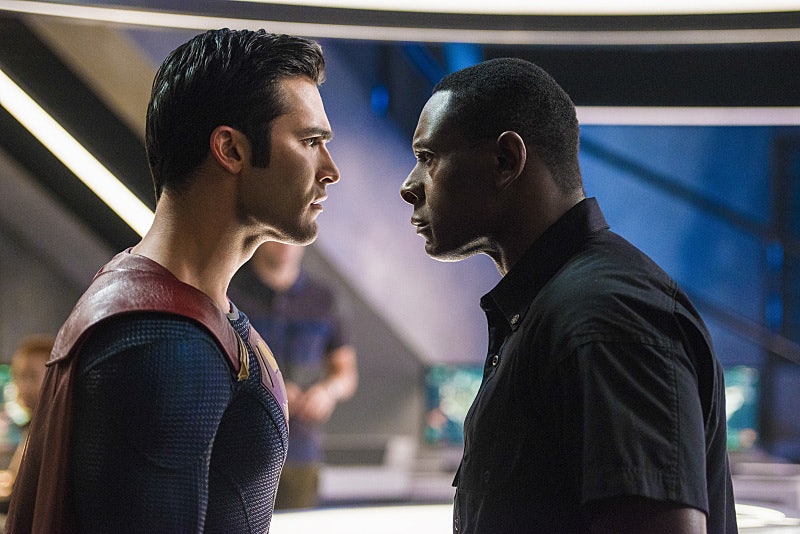 While the identity of the man in the escape pod is still unknown as far as Kara and Kal are concerned, the new Supergirl did reveal one mystery from Season 1 — the inside of Project Cadmus! Not only that, but they seem to have created a major villain. Who is Metallo on Supergirl ? The DC comics character was introduced at the end of the Season 2 premiere.

We met the character who would become Metallo as John Corben, an assassin going after Lena Luther. After he was injured in a fight against Supergirl and Superman, he was whisked away to Cadmus, where a mysterious woman injected him with a green substance and re-named him Metallo — just like that.

In the comics, Metallo is "created" by a Professor Emmet Vale, who was obsessed with Superman. He was given some mechanical parts, making him a cyborg, and a heart made out of kryptonite, the green element that can infamously weaken and kill Superman. Another version of the comics gives Corben a slightly different origin story that involves General Lane and a program called "Project Steel Soldier," but he receives a kryptonite heart all the same.

The presence of kryptonite was a point of contention in the episode before it was injected into Corben. While Kara has encountered the element at the DEO and doesn't mind that her Martian boss keeps it around, Clark objects to it even being on Earth. He and Hank aren't exactly friends because of this issue. While the Martian head of the DEO is trustworthy, what happens if kryptonite is taken out of his hands? Something tells me that by the time Season 2 of Supergirl is over, that is exactly what is going to happen.