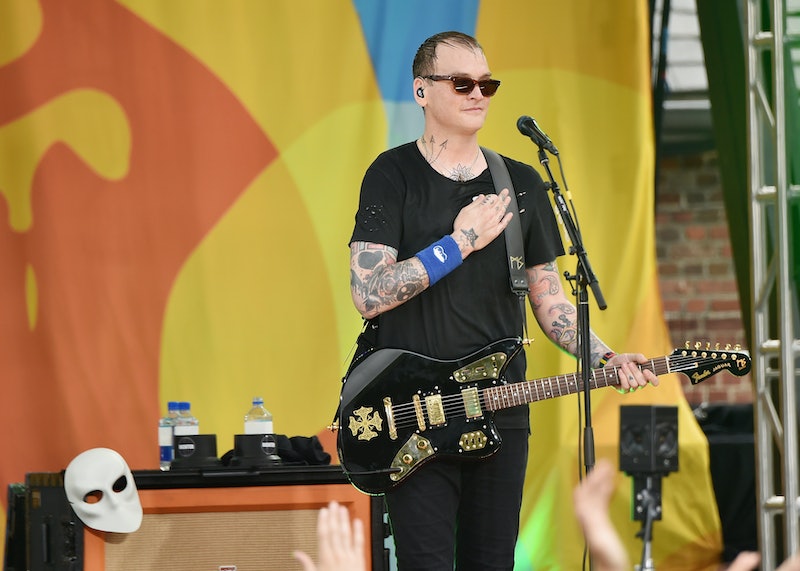 For reasons that aren't entirely clear, there's a possibility that former Blink-182 singer/guitarist Tom DeLonge emailed Hillary Clinton's campaign manager to talk about UFOs. WikiLeaks released documents purporting to be emails from Clinton campaign chief John Podesta, and amongst them was a request by DeLonge for a face-to-face meeting to discuss extraterrestrial life.

It's unclear, however, whether such an exchange ever took place, or whether the email itself is legitimate: There's reason to believe this latest Wikileaks dump was altered before its release, and the Clinton campaign wouldn't confirm or deny to Bustle that Podesta and DeLonge ever met.

Both Podesta and DeLonge have a well-documented interest in UFOs and extraterrestrial life. Podesta has long been a proponent of greater government transparency regarding potential alien life, and says he's spoken with Clinton about the necessity of releasing documents relating to Area 51. DeLonge, meanwhile, is just as much of an alien enthusiast as he is a musician these days, having recently unveiled a multi-part, transmedia project intended to reveal the "truth" about UFOs, extraterrestrials and whatnot.

"I would like to bring two very 'important' people out to meet you in DC," reads the alleged email, the authenticity of which has not been verified. "I think you will find them very interesting, as they were principal leadership relating to our sensitive topic. Both were in charge of most fragile divisions, as it relates to Classified Science and DOD topics. Other words, these are A-Level officials. Worth our time, and as well the investment to bring all the way out to you. I just need 2 hours from you."

DeLonge added that he's "just looking to have a casual, and private conversation in person" with Podesta, according to the alleged email.

What to make of this? Well, for one, it brings a bit of completion to the story arc that DeLonge began in "Aliens Exist," an underrated track from the 1999 Blink-182 album Enema Of The State. In the song, DeLonge strongly hints at the possibility of extraterrestrial life, but adds, "I am still a skeptic." Now, it seems, DeLonge has made the transition from "skeptic" to "guy who asks to meet with former government officials about UFOs."

Moreover, it's a reminder that Clinton herself is much more pro-UFO, if you want to call it that, than most mainstream presidential candidates in America. In an April interview, she said she doesn't know for sure if UFOs exist, but added that "there's enough stories out there that I don't think everybody is just sitting in their kitchen making them up." When asked the year before if Earth had ever been visited by aliens, she responded that "I think we may have been," and said that she'll "get to the bottom" of whether or not aliens exist if elected president.

So, there you have it: America is on the cusp of electing not only the the first female president, but also the president most inclined to investigate the possibility of UFOs.