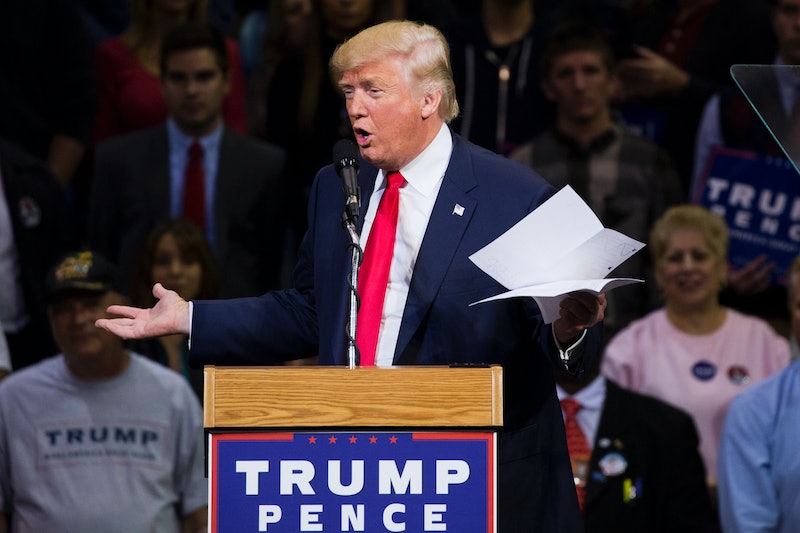 After several debates, the presidential election doesn't seem to be all that close anymore. The polls — both those pitting Hillary Clinton against Donald Trump and four-way scenarios — show Clinton with a healthy lead of at least 5 percentage points. One NBC News / Wall Street Journal poll showed Clinton ahead by 14 points. It seems shocking when it was once so close, but there's an easy explanation for why Trump's losing, and Nate Silver tweeted it out.

Basically, Trump hasn't switched gears to appeal to a mainstream, center-of-the-spectrum electorate. He keeps on keeping on as if the goal is to out-right-wing Ted Cruz rather than attract voters from the middle who are undecided. The ones considering voting for him have different concerns, and the way he's running the campaign just doesn't make sense anymore.

The way Silver put it is perfect: "Doubling down on a loyal 35% of the electorate is an uncannily brilliant strategy in a 17-way primary but not looking so hot in the general." Essentially, Trump might be making his core supporters happy by bringing Bill Clinton's accusers to a debate with him, but there's probably not many suburban women from Pennsylvania who were convinced. Nor were African Americans when he kept referring to the "inner city" as "Hell."

As far back as March, the media predicted Trump's pivot to the center. (Many Trump surrogates said that it was coming.) In June, it seemed like this might have started; Trump fired his controversial campaign manager, Corey Lewandowski. Then August was the next big push, as if the moment had finally arrived, as his next campaign manager, Paul Manafort, was also brought down, this time by ties to Ukraine's pro-Russia elite.

His current top campaign member is Kellyanne Conway, and she tried to explain that his pivot would be "stylistic." So basically the same issues, but presented in a different, more professional and refined way. Mother Jones even speculated that he just needed to refrain from shouting and acting crazy on TV for a few weeks, and he could win some people over. But he's just not capable of doing that.

At least, not after the release of the Access Hollywood tape in which Trump brags about sexually assaulting women. Instead of fully apologizing, Trump brushed it off as "locker room banter." He could have taken that moment to give a sincere, thoughtful reaction. Instead, he deflected like always, and then went on the offensive at the next debate.

Anyone who thought Trump had learned his ways and would show a modicum of respect to the office of the presidency and the race to get there was proven wrong Sunday night. Even before the debate, he started with a spectacle — that press conference with Bill Clinton's accusers was a pure distraction, and completely hypocritical, since he called some of the women "losers" back in the 1990s. What could he have been thinking?

As Silver argued before the pre-debate snafu, Trump could be at risk of losing anyone who's left undecided. Instead of having a floor of 40 percent support, that could be his ceiling, as voters are turned off by his past comments and current actions:

What if he doesn’t win over any undecideds, and 40 percent turns out to be more of a ceiling than a floor? Trump’s unfavorable rating was approaching 60 percent even before the “hot mic” tape surfaced, which means he was already running into a headwind in terms of picking up additional support. Furthermore, he’s targeted a narrow slice of the electorate instead of a majority coalition. He doesn’t have much of a ground game to turn out his marginal voters, and, especially if he’s losing in the polls, they could decide that it just isn’t worth the time to vote.

If he continues down the current path, "doubling down on the loyal 35 percent" as Silver said, that's precisely what's going to happen.