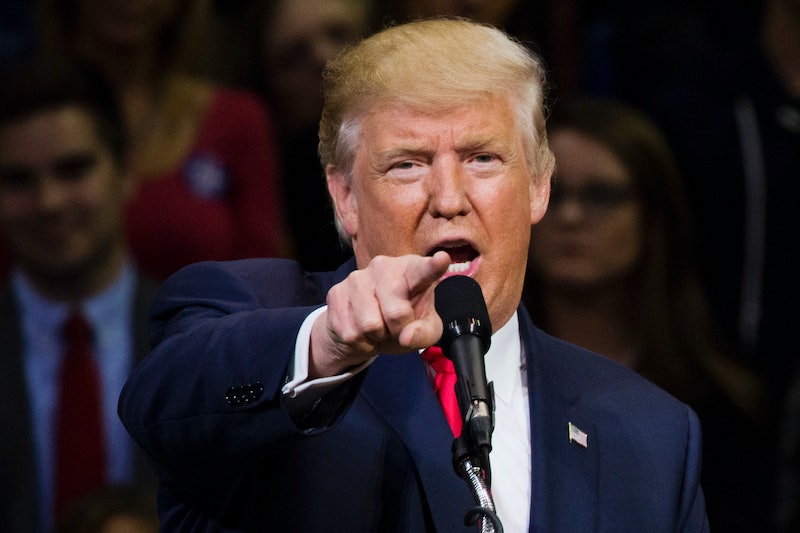 Donald Trump started Tuesday morning with an all-out attack on the person he perceives as his greatest threat in November — someone who is steeped in establishment politics, a foe whom he considers another failed Washington stooge. It's Paul Ryan, fellow Republican and Speaker of the House. The real onslaught began at 8:15 a.m. EST, when Trump, in his classic fashion, found a little time in his busy schedule to praise himself. “Despite winning the second debate in a landslide (every poll), it is hard to do well when Paul Ryan and others give zero support!”

Aside from the fact that he didn’t win every poll — the CNN/ORC poll gave it to Hillary Clinton, with the Democrat getting 57 percent to Trump’s 34 percent — there’s an interesting logic gap in this first tweet. The construction he’s trying to use should go something like “Despite [x] advantage, I experienced [y] failure” — i.e. “Despite leaving an hour early, I still got to the airport late.” It would have made more sense if he’d said “Despite zero support from Paul Ryan and others, I still won the second debate in a landslide.” Instead, what he’s doing is establishing his win while making Ryan look like he’s obstructing Republicans.

But Trump was only getting started.

This is another amazing feat of verbiage, with Trump effectively claiming the mantle as the center of the Republican Party. We can argue about how party loyalty works when the person to whom Ryan is being disloyal is threatening to unravel the party he’s been a part of for most of his life. The subtle addition that it’s Ryan's members “going wild” makes it look like Ryan is the only Republican on the planet showing such disloyalty, even though we know the opposite to be true.

You know what, though? Enough about Ryan. Let’s talk about who really matters here: Trump.

This one is just pure poetic garbage. If there’s someone who has never once in his life experienced restraint, it is Donald Trump. What on earth has he been shackled by? Decency? Respect for his fellow human being? It reminds me of the same logic used by religious people who claim that being forced to serve gay people is a violation of their beliefs: The "confining" restraint of being tolerant interferes with their own strong-held values. If an unshackled Trump weren’t so horrifying an idea, the logistical contortions he’s going through might almost be impressive.

Whereas before, Trump’s attacks seemed focused on a specific component of the Republican Party — namely, Ryan — here he opens the aperture wide, calling the whole party disloyal. It’s unclear exactly what his aim is here. To communicate to his followers that, in fact, “Republicans” are the “other”? If Trump’s legions alone were enough to get him elected, this would make sense, but he needs more moderate (and proud) Republicans, and in fact needs those Republicans to be loyal.

He also confuses “cheating Bernie” with “disloyalty,” even though one could argue that the Democratic superdelegates were showing party loyalty when they backed Clinton en masse. Maybe the shackles he’s thrown off are the shackles of words having definitions.

In what might be his strangest tweet yet — not to be confused with “most offensive” or “most vomit-inducing” — Trump implied that the Republicans who bailed on him are worse than Clinton, which I wasn’t even sure was possible. But the real revelation in this Tweet is the extent to which Trump apparently feels embattled “from all sides.” It’s Trump vs. the world, and perceiving that he is surrounded, he’s hitting out in every direction.

And apparently, The Donald isn't done. He just tweeted out an attack on John McCain.

Well, at least Trump was kind enough to slam McCain for his well-known colorful language, and not, you know, his service to his country.

It’s clear from these tweets that we’ve turned some kind of corner in this campaign. With the election exactly four weeks away, this isn’t just Thelma and Louise getting ready to go over the cliff — this is their convertible already off the ground, sailing into oblivion.