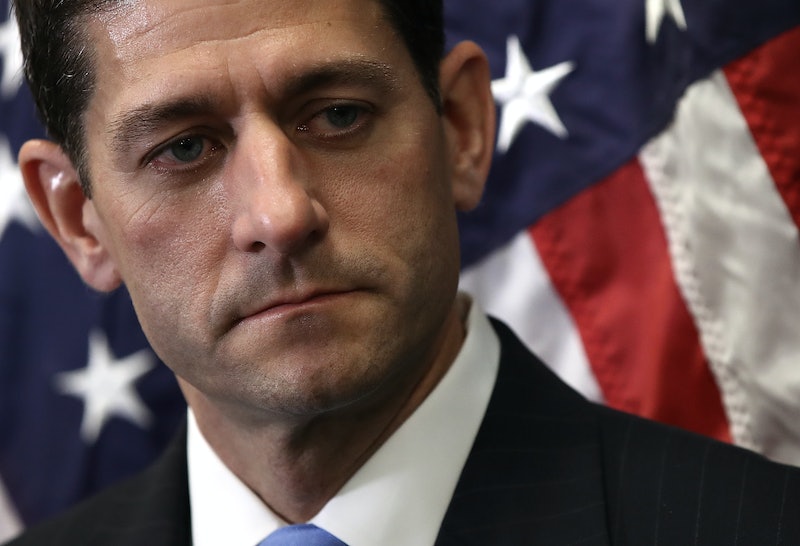 To all of the Republicans just leaving Trump now: Look at your life! Look at your choices! In June 2015, Donald Trump declared his candidacy in a burst of racism and bravado. Almost 15 months and countless sexist, racist, and bigoted comments later, a video surfaced of him bragging about groping women without consent. Only then did the mass exodus of major Republican politicians begin — and the Republicans who are just now ditching Trump should be ashamed of themselves.

The video of Trump describing his conquests was a stunning display of callousness to everyone who watched it. You know the moment when you overhear someone talking about you in a way that they wouldn't like you to overhear? That's what it was like for all women collectively — a window into a world that we never want to see, where creepy old men load up on breath mints in case something about us moves them to "just kiss" and not "even wait."

Trump has already given us glimpses into that world before, when he's talked in no uncertain terms about women whom he doesn't find attractive. We already heard that flat-chested women can't reach peak attractiveness and that beauty queens who gain some weight become fat pigs, for example. The aforementioned video, then, was probably most damaging to those of us who have ever been foolish enough to consider ourselves attractive, to those of us who weren't already terribly self-conscious about our small breasts or weight fluctuations.

Attraction is a funny thing, and it changes depending on the person. Trump has his opinions about women, and we have to assume that, say, President Obama does as well — just as we have our own opinions about Trump and Obama. I don't know if Obama would consider me attractive if I met him. I wouldn't want to know — any more than I want to know that in Trump's eyes I am far, far from a 10.

This whole election has given women more to think about along those lines than we ever wanted or needed to, and the Republican Party has, with their outward or tacit support of Trump, been condoning it the whole time. Every time they let it slide when he said something terrible, it was yet more proof that winning the election was more of a priority than allowing women to feel safe and comfortable as they go about their daily lives.

Why, Republican leaders, did it take this for you to publicly denounce your candidate? Why was everything before this okay, or at least okay enough for you to try to bury it and go along with the election?

Perhaps the worst part is that Mitch McConnell and Paul Ryan, the two highest ranking Republicans in the country, have not officially withdrawn their support or pledged not to vote for Trump, although they have castigated him with their words. Those words themselves are worth a mention as well; to Ryan, "women are to be championed and revered, not objectified." To McConnell, the video was apparently only offensive because he's the father of three daughters.

Just like every other woman in the world, I am someone's daughter — but surprisingly enough, it's not the defining element of my identity. I also don't live in the fifteenth century, so it feels a bit strange to hear that I should be championed and revered as a woman. So many of the statements against Trump came in the form of defenses for women who were defined in terms of their relationships with men — as wives, daughters, sisters, or mothers. You really have to give it to Ted Cruz, for example, who denounced the comments for exactly what they were, not only because he has a wife and daughters:

There are Republicans who have stood their ground against the Trump tsunami, and they've come out looking like absolute paragons of virtue even to Democrats who might have thought differently just a year ago. Mitt Romney made his feelings about Trump known early on. Lindsay Graham never flirted with a vote for Trump. The Bushes have left Democrats nostalgic for the time when it was assumed that Jeb Bush was next in line for the throne.

But to the others — ditch him now, sure. Better late than never. You don't want to vote for this sexist demagogue and then regret it for the rest of your political lives. But as you're casting your vote for anyone else, remember: you should all be ashamed of yourselves.